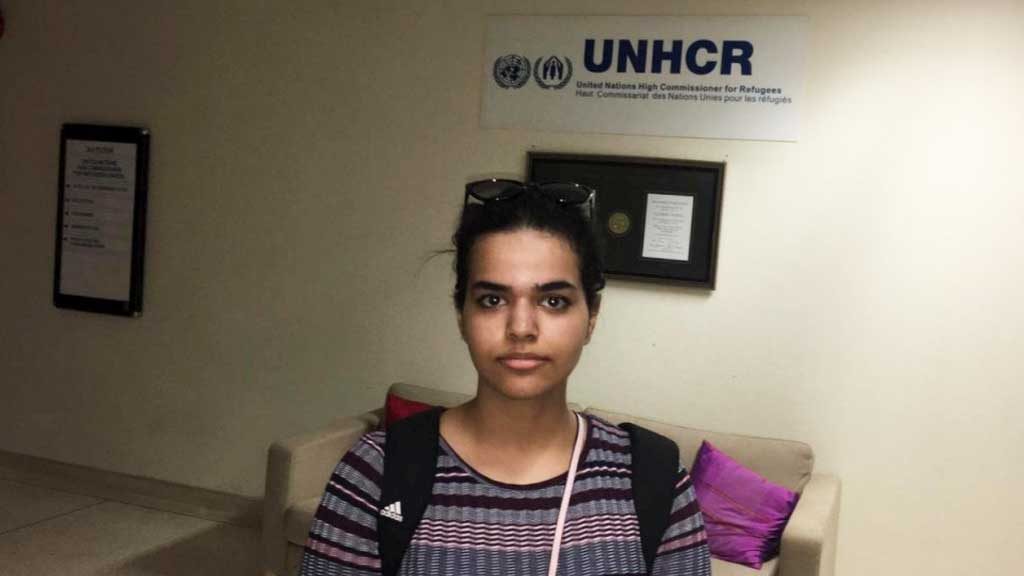 One Saudi teen wins her freedom

2,500 Pakistani Christians stuck in Thailand still do not have theirs

A Saudi woman who fled her family and became stranded at Bangkok’s main airport has flown to Canada after being granted asylum status. Rahaf Mohammed al-Qunun, 18, had been trying to reach Australia via Bangkok, but was initially told to return to Kuwait, where her family were waiting. She refused to fly back and barricaded herself into her airport hotel room, attracting international attention.

She said she had renounced Islam, which is punishable by death in Saudi Arabia. The UN’s refugee agency has said it considers her to be a legitimate refugee.

Canadian Prime Minister Justin Trudeau told reporters: “Canada has been unequivocal that we will always stand up for human rights and women’s rights around the world. When the UN made a request of us that we grant Ms al-Qunun asylum, we accepted.”

The UNHCR has welcomed Canada’s decision to resettle Ms Qunun. The UN High Commissioner for Refugees, Filippo Grandi, said: “Her plight has captured the world’s attention over the past few days, providing a glimpse into the precarious situation of millions of refugees worldwide.

Why did she flee?

Under Saudi Arabia’s “male guardianship system”, a Saudi woman is required to obtain a male relative’s approval to apply for a passport, travel outside the country, study abroad on a government scholarship, get married, leave prison, or even exit a shelter for abused victims.

Ms Qunun told the BBC: “I shared my story and my pictures on social media and my father is so angry because I did this… I can’t study and work in my country, so I want to be free and study and work as I want.” She also said she was afraid her family would kill her.

Why did the Pakistani Christians flee to Bangkok?

In Pakistan, a country that places Islam as the central principle that determines government policy, Christians are persecuted, denied equal opportunities and frequently falsely accused of blasphemy, a crime that carries the death sentence.  Even if acquitted the accused is hunted down by fanatical Muslims to be murdered – it is a way of punishing Christians with death due to their faith.

Yet still 2,500 men, women and children are left to rot in Thailand, unable to work, earn their own incomes, draw on any government support.  But for the support of a few local Christians, these people would starve. Sixteen have died in the last 5 years waiting for asylum.

The UNHCR has been criticised for doing too little for these people, unduly influenced by the Organisation of the Islamic Conference to deny Christians the human rights they are entitled to. International media do little to draw attention to this gross injustice.

Because the Thai authorities round up Christians and place them in inhuman detention centres without medical assistance, some Christians have concluded that, perilous though their situation is, it is better to go back to Pakistan than remain in the cruel situation in Thailand.

We rejoice in the bravery and freedom of Rahaf Mohammed-al-Qunun.  Now, we would like to see the UNHCR and the international community finally sort out the problem of the Pakistani Christians trapped in Thailand, same as the way they did for Rahaf who was granted refugee status and resettled to a safe nation through an extraordinarily rapid process of 10 days. or will their plight not be heard as they have not captured the world’s attention? Does the UNHCR only respond when a mediagenic refugee merits widespread media attention? Surely their remit also extends to the thousands of ordinary Pakistani Christians trying to escape persecution.

Of course, the ultimate solution is for Islamic countries to stop threatening those who want to make up their own mind about what is, or is not, the truth: truth about God, truth about the threats they face, truth about what they want to do with their lives.

Would Islam survive this freedom?  If the answer is no, then why on earth does anyone believe in it and submit to it? God bless all those who yearn for freedom,