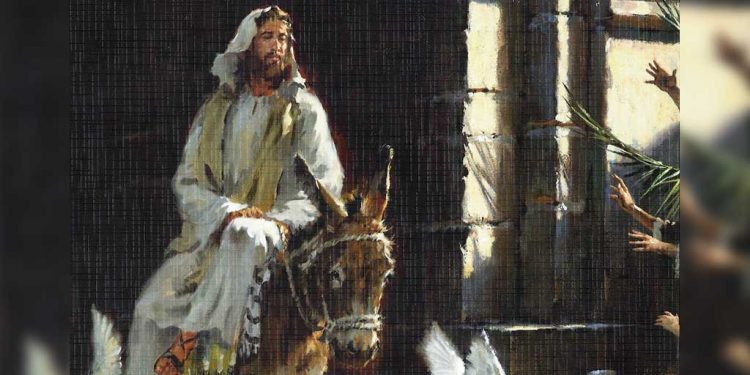 On this day the church remembers Jesus’ triumphal entry into Jerusalem on a donkey.

Matthew in his Gospel describes the event:

“Now when they drew near to Jerusalem and came to Bethphage, to the Mount of Olives, then Jesus sent two disciples, saying to them, “Go into the village in front of you, and immediately you will find a donkey tied, and a colt with her. Untie them and bring them to me. If anyone says anything to you, you shall say, ‘The Lord needs them,’ and he will send them at once.” This took place to fulfill what was spoken by the prophet, saying, “Say to the daughter of Zion, ‘Behold, your king is coming to you, humble, and mounted on a donkey, and on a colt, the foal of a beast of burden.”  [Matthew 21:1-5]

John in his Gospel adds the following detail about Jesus’ disciples:

“And Jesus found a young donkey and sat on it, just as it is written, “Fear not, daughter of Zion; behold, your king is coming, sitting on a donkey’s colt!” His disciples did not understand these things at first, but when Jesus was glorified, then they remembered that these things had been written about him and had been done to him.”  [John 12:14-16]

The prophet whom both disciples and Gospel writers refer to is Zechariah, who wrote his prophetic book around 520-518 BC.  He wrote this:

“Rejoice greatly, O daughter of Zion! Shout aloud, O daughter of Jerusalem! Behold, your king is coming to you; righteous and having salvation is he, humble and mounted on a donkey, on a colt, the foal of a donkey.” [Zechariah 9:9]

Now, why did Jesus ride into Jerusalem on a donkey?  Surely, as a triumphant king of the Jews he would have ridden in a horse, a grand white charger, perhaps?

Though Jesus had travelled to Jerusalem numerous times to observe the feasts, his final entry into Jerusalem had a unique significance. He was triumphantly arriving as a humble King of peace. Entering a city on a donkey signified entry in peace, rather than a conquering king arriving on a horse.

Now, by the way, most people have it in their mind that the meekness and the lowliness was to do with the fact Jesus rode on the donkey. This is not the case.  A donkey was established as a royal steed in the Old Testament. The king rode on a donkey. A king of Israel did not ride into one of their cities on a horse, because then that would have meant he had come to conqueror.  But since the city was at peace with their king and the king was a peace with the city, he rode on a donkey.

When Absalom usurped the kingdom from his father, David, the first thing he did was to go get his royal donkey and ride through the streets of the city. So, the donkey was a sign of an Israelite king’s kingliness, a kingliness already established and accepted.

Now Jesus was not officially the king of the Jews of course.  As the Pharisees would shout to Pilate at Jesus’ trial a few days later, ‘We have no king but Caesar!’  Nevertheless, when Jesus rode that donkey into Jerusalem, He was declaring His kingly authority.  More than that, He was declaring that He was King by God’s choice, in other words He was anointed, i.e. the Messiah, or the Christ.  He was God’s anointed ruler.  Jesus was consciously enacting Zechariah 9:9.

The crowd loved it.  The children praised Him, while the Pharisees absolutely hated it.

So, where was the righteousness and humility?  It was in the character of the King.  Jesus (His name means salvation) was indeed bringing salvation which would happen through His crucifixion and death, the lamb of God slain for the sins of the world.  He came to His own city.  To take the sins of the world upon Him he must be the spotless lamb of God, righteous and humbly, not unjust and proud.

But within a few days the people rejected Him and called for His death by crucifixion.   They rejected Him because they wanted a King who would drive out the Romans and make Israel great again.  But that was not Jesus’ plan.  Jesus had a much larger plan – to overcome the whole world through His love for it, a love demonstrated in His sacrifice of Himself.

This is how John summed up Jesus:

“He was the true Light, which doth enlighten every man, coming to the world;
In the world He was, and the world through Him was made, and the world did not know Him:
To His own things He came, and His own people did not receive Him;
But as many as did receive Him to them He gave authority to become sons of God —
To those believing in His name,


Who — not of blood nor of a will of flesh, nor of a will of man but — of God were begotten.
And the Word became flesh, and did tabernacle among us, and we beheld His glory,
Glory as of an only begotten of a father, full of grace and truth.” [John 1:9-14]