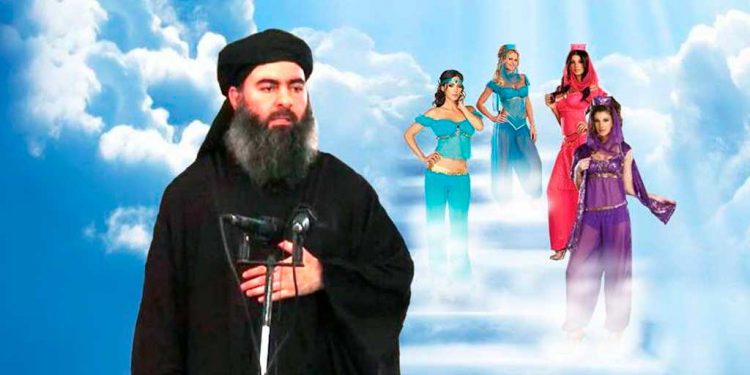 Last month, when the battle for Mosul began, Islamic State caliph Al-Baghdadi declared: “All, without exception, will enter paradise as martyrs.  Moreover, you will enter paradise with four more Houris than other martyrs. For just as you stand by me now, so will they stand by you, or under you, or above you, so that you might forget what will happen to you by way of violence, death, and degradation in this war.”

There is an authentic hadith—a statement attributed to Muhammad that mainstream Islam acknowledges as true—which jihadi organizations quote:

“The martyr is special to Allah. He is forgiven from the first drop of blood [that he sheds]. He sees his throne in paradise…. He will wed the Houris  and will not know the torments of the grave and safeguards against the greater horror [hell]. Fixed atop his head will be a crown of honour, a ruby that is greater than the world and all it contains. And he will copulate with seventy-two Houris”

There are numerous videos of Muslim men discussing their excitement at the prospect of dying in the jihad and being rushed to the embraces of these supernatural celestial women.

There is a video of a Muslim cleric taking and answering questions via phone calls. A woman called in, at outrage at the Houris, saying that she would be driven “mad with jealousy” seeing her husband copulating with these supernaturally beautiful women all day in heaven.

This is all rather different that what Jesus Christ said about sex and heaven. There is an episode where a party of Jews, the Sadducees, who did not believe in life hereafter, came to Jesus with a challenging question to make their case.  Jesus replied:

‘ “You are being misled, by not knowing the Scriptures, nor the power of God. For in the resurrection they neither marry, nor are betrothed, but are like messengers [angels] of God in heaven. But concerning the resurrection of the dead, have you not read what was spoken to you by God, saying, ‘I am the God of Abraham and the God of Isaac and the God of Jacob?’ God is not the God of the dead, but of the living.” ’And when the crowds heard it, they were being astounded at His teaching.’ (Matthew 22:29-33 MLV)

Mohammed said jihadis will wed and copulate with houris. Jesus said in the resurrection the resurrected ones neither marry nor are betrothed.  This is a direct and clear contradiction between two alternative visions of our hoped for eternal future and reward: one of sexual pleasures (for the men) in one case, and in the other case eternal companionate friendship with God in peace and love, but without the need for procreation (logically, eternal beings have no need to). No more than one of these two men can be correct.

The bible also says that murderers and paramours (those who sin sexually) will not enter heaven, so those who shed blood in offensive wars of conquest, marry temporary wives or engage in rape are in for a difficult afterlife, according to the Bible.

Secular humanists may see all this talk of Paradise as make-believe, but Jesus is very clear of the reality and indeed purpose of Creation is that it is but the introduction to the eternal creation in which God and His people live in harmony without sorry or death, and that Jesus and He alone is the way into that Kingdom of God through faith in Jesus as the Son of God. The fact of His resurrection rather proves His point, as does the astonishing alignment between the Biblical account of creation and the modern scientific understanding of its evolutionary development after the Big Bang, so called, as well as the prophetic witness of Isaiah chapter 53 describing, 750 years before the ministry of Christ, who Christ would be – God coming as the Suffering Servant.

We also need to remember that the Apostles and many early Jewish Christians were convinced of the facts and meaning of Jesus life, death and resurrection, as were many others in a relatively short space of time. The only blood that got spilt during this early expansion of the church was their own, for they suffered grievous persecution for their beliefs. Men don’t choose to die for something they know to be a lie.

Not that much has changed. Today Christians are dying and suffering persecution. They do so because they know Jesus to be real, and they are not going to betray Him.

Muslims may retort that the Bible has been altered and that Jesus preached Islam. However, if we look for any evidence to back that claim, we find none. There is a large body of ancient writings, Jewish and Christian, and nowhere in any of it is there recorded a single syllable about Islam. There is only one logical conclusion: the Bible was not altered and that Jesus did not preach Islam; Islam only started with Mohammed.

Jesus is also very clear about those who claim to be prophets and christs (ones chosen by God):

‘Then if anyone says to you, “Behold, here is the Christ”; or, “over here is the Christ.” Do not believe it. For false christs and false prophets will arise and will give great signs and wonders; so-then to mislead, if possible, even the chosen. Behold, I have spoken to you beforehand. Therefore if they say to you, “Behold, he is in the wilderness;” do not go. “Behold, he is in the storerooms;” do not believe it.’ (Matthew 24: 23-26)

To conclude, read what God’s purpose for the new heaven and earth will be:

‘And I saw a new heaven and a new earth; for the first heaven and the first earth have passed away, and the sea is no more. And I saw the holy city, new Jerusalem, coming down from heaven of God, having been prepared as a bride adorned for her husband. And I heard a loud voice from heaven saying, Behold, the tabernacle of God is with men and he will reside with them and they will be his people and God himself will be with them and will be their God. And he will wipe-away every tear from their eyes, and death will be no more; neither will there be mourning, nor crying, nor pain, any more. The first things have passed away. And he who is sitting upon the throne said, “Behold, I am making all things new. And he says to me, “Write, because these words are faithful and true” (Revelation 21:1-5. MLV).