The world can no longer ignore wilful starvation 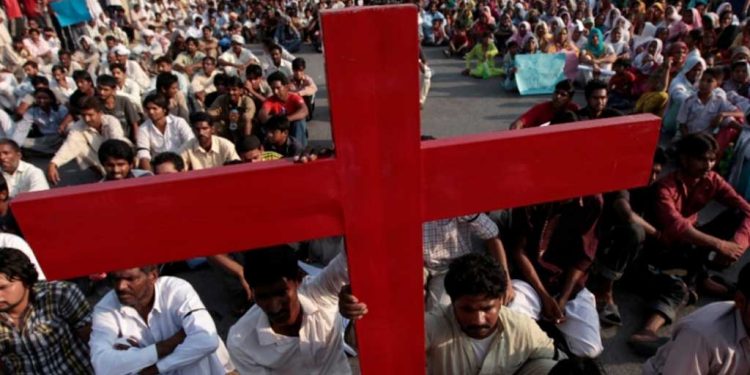 More reports are being posted of the systematic starvation of Christians, Hindus and other members of minority faiths in Pakistan.  Asia News reports two cases in Pakistan of Hindus and Christians being denied government food aid during the coronavirus crisis. According to the news story, “without the help of… a Muslim human rights activist, 120 Christian families in the district of Kasur (Punjab) would have starved.”

Describing as “reprehensible” the reports of food being denied to Hindu and Christian communities in Pakistan amidst the coronavirus crisis, a US government organisation has urged Islamabad to ensure that food aid from distributing organisations is shared equally with all religious minorities in the country.

“As COVID-19 continues to spread, vulnerable communities within Pakistan are fighting hunger and to keep their families safe and healthy, food aid must not be denied because of one’s faith,” the US Commission on International Religious Freedom (USCIRF) Commissioner, Anurima Bhargava, said on Monday.

The USCIRF said it is “troubled” by the reports of food being denied to Hindu and Christian communities in Pakistan amidst the coronavirus outbreak in the country.

“We urge the Pakistani government to ensure that food aid from distributing organisations is shared equally with Hindus, Christians, and other religions minorities,” she said.

In Karachi, there have been reports that the Saylani Welfare International Trust, a non-government organisation established to assist the homeless and seasonal workers, has been refusing food assistance to Hindus and Christians, arguing that the aid is reserved for Muslims alone.

USCIRF Commissioner Johnnie Moore said that in a recent address to the international community, Pakistan Prime Minister Imran Khan has noted that the governments in the developing world are facing the challenge of saving people from dying of hunger, while also trying to halt the spread of COVID-19.

“This is a monumental task laying before many countries. Prime Minister Khan’s government has the opportunity to lead the way, but they must not leave religious minorities behind.”

If we look behind these headlines, we find that the discrimination and economic opportunities denied Christians in Pakistan has left them poor, illiterate and without any savings, given the meagre wages they can earn.  Now the lockdown has been imposed, they are not earning, and their small stocks of food have run out.  There is nothing for them to eat.

Why is it that Muslim agencies deny them food?  Is it Islam?  In the ‘Reliance of the Traveller’, a widely consulted manual of Sharia Law, it states quite clearly that “it is not permissible to give zakat [alms] to a non-Muslim.”  A Muslim’s conscience might tell him to be careful about spreading a virus, or it might tell him to share food with a hungry Christian. According to the Islam, a Muslim is not supposed to consult his conscience. He is supposed to consult the book—either the Koran or a manual of Sharia Law—and follow the commands of Allah, no matter how contrary to humanity they may appear.  And he is not responsible for the consequences of his actions except in one respect: Islam means “submission,” and the foremost duty of a Muslim is to obey. Indeed, the most frequently repeated phrase in the Koran is “obey Allah and his Apostle,” Muhammad.   And the consequence is the starvation of his Christian or Hindu neighbours.

I can only imagine what the true God of Love thinks of this.  Is this the behaviour that gets you rewarded with eternal life?

There have been incidents where Muslims told Christians to convert to Islam if they were to receive help.  Some Christians have committed suicide, unable to tolerate the hunger but unwilling to damn their souls by ‘bowing to the Beast’ as they understand it.

JCM receives many pleas from Christians for assistance.  Any resources we had to assist are now long exhausted.  If you can contribute, every drop will go to Christians who need it in Pakistan. There is a link on the JCM website: www.jesuschristformuslims.com

Like St Paul did, who asked the gentile churches to assist the starving Jewish Christians in Judea during the famine then, we too ask our readers to save out of what they can to help our brothers and sisters in Pakistan.  If we don’t, there may not be many that survive.  I do not exaggerate.

I also appeal to the government of Pakistan.  If you do nothing, this will go down in history as a genocide, just as wicked as the Armenian or Rwandan genocides. Images of starving Christians peering out from their hollowed faces and emaciated bodies will adorn the newspapers and history books and videos, just as those of starving Jews in Nazi death camps once did.  Is this really what you wish for as your international reputation, as Islam’s reputation?  Trust me, the world will not forget, the Church certainly won’t.  Now is the time to act, before it is too late, and we will be among the first to thank you. God bless you all,

Tree and Its Fruit

The Starvation of the Christians and Hindus in Pakistan

The Covid Cult and the Ten Commandments

The Starvation of the Christians and Hindus in Pakistan

Who is Jesus Christ?

The Miracles That Jesus Performed

Psalm 23 – The LORD Shepherds His People