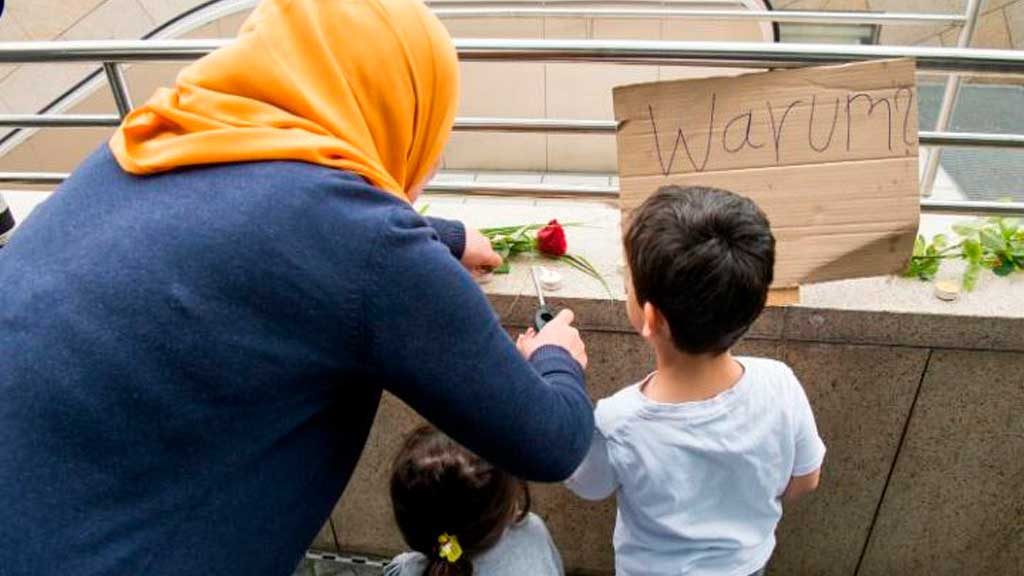 The sign in German: ‘Warum?’  It does not really need translating.

Another week in Europe, another mass slaying, another shout of ‘Allahu Akbar!’ which means ‘Allah is greater than your god or your government’. Time and again we see it as the token of explanation given by a mass murderer, who seems to think that the best thing they can do is kill people. Yesterday in Munich, 18 year old Ali Sonboly shouted it out three times as he slaughtered children, adolescents and adults. Having killed 9 people and wounded a further 16, he then killed himself. The police later found 300 rounds of unused ammunition in his bag.

Police investigators discovered that young Ali had a collection of books on mass shootings. They didn’t say if he had a Qur’an. Some school colleagues described him as a loner, quiet, someone who made threats to kill his online gaming friends. Someone else, whom the police would very much like to have a conversation with, gave or sold him an unregistered Glock pistol and over 300 rounds of ammunition. But none of these questions answer the question ‘Why?’, or in this case, ‘Warum?’

The Apostle Paul wrote: ‘Do not be misled. God is not ridiculed; for whatever a man sows, he will also reap.’ (Galatians 6:7).  The prophet Hosea wrote something similar: ‘They sow the wind, and reap the whirlwind.’ (Hosea 8:7)

These are not admonishments just for a few Jews or some overly bookish Christians. God speaks to the world!  He spoke to the Jew first, but then to all the world: Arameans, Arabs, Persians, Europeans, Americans, Africans, Indians, Chinese, Japanese, Aborigines, everybody.

If we fill our thoughts with dreams of slaughter, jihad, murder, death, mayhem, we will eventually do it.  If we desire to murder in the name of Allah, Shiva or Bel or whatever, and go on to do it, it is still murder, and the God of all flesh has commanded: ‘Thou shalt not murder.’

Alternatively, we could do what the Jesus has taught and shown us, which is ‘love your enemies and do good to those who hate you.’  This is the choice offered to the world, and we are all free to choose wisely.

Hear the words of the Apostle Paul as he teaches the word of God: ‘Owe nothing to anyone, except to love one another; for he who loves another has fulfilled the Law. For this, ‘You will not commit adultery, you will not murder, you will not steal, you will not covet’ and if there is any other commandment, it is summed up in this word, in this: ‘You will love your neighbour like yourself.’ Love works no ill to his neighbour. Therefore, love is the fulfilment of the law.’ (Romans 13:8-10).

On the other hand, if people want to carry on murdering, then this is their final destiny at the hands of a just God. In the words of the risen Christ himself; “Write, because these words are faithful and true.” And he said to me, “I have become new. I am the Alpha and the Omega, the beginning and the end. I will give freely to him who is thirsty out of the spring of the water of life. He who is overcoming will inherit these things, and I will be his God and he will be my son. But to the cowardly and unbelieving and sinners and detestable and murderers and fornicators and sorcerers and idolaters and to all the false witnesses, their part will be in the lake which is burning with fire and brimstone; which is the second death.” (Revelation 21:6-8).

Partners with the Persecuted Ministry