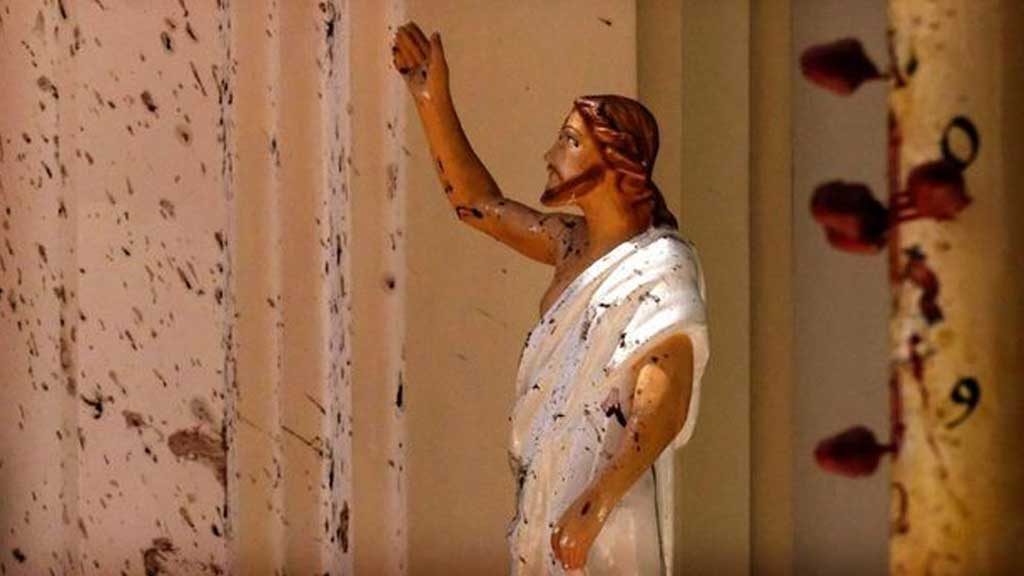 Sri Lanka: Christians, and tourists, businessmen and engineers, families and children – 300 slaughtered.  Why?

“The Islamic State supporters have indicated that the Colombo bombings were in retaliation for strikes on Mosques.

SITE Intel group said that the ISIS supporters portrayed the attack as revenge for strikes on mosques and Muslims in general.”

So, these specific individuals were involved in strikes on mosques and Muslims?  No?  Then it is not even retaliation.  Describing this as retaliation is merely a fig leaf.  Its real purpose is, presumably, to obey the Quran:

‘And when the sacred months have passed, then kill the polytheists wherever you find them’ [Surah 9:5].  Christians are what is meant by the term ‘polytheists’.

O Muslim, if you remain a Muslim, you are by your association with Islam supporting the men who carried out these murders and approving of the deeds of your brothers, giving your approval to the concept of ‘killing [Christians] wherever you find them.’

You may consider this to be Sharia Law, but in fact this is lawlessness, for God’s law says: ‘You shall not murder.’

According the Old Testament Law, the community had a specific requirement to deal with murderers:

Do not accept a ransom for the life of a murderer, who deserves to die. They are to be put to death.

Do not pollute the land where you are. Bloodshed pollutes the land, and atonement cannot be made for the land on which blood has been shed, except by the blood of the one who shed it.  Do not defile the land where you live and where I dwell.’  [Numbers 35: 30-31, 33-34]

According to God’s law, murders are to be properly tried, with tested evidence and if convicted executed.  This is what lawfulness looks like, even at its most harsh.

In the event of war, this legal principle is effectively to be carried out there and then on the field of battle.

Were any of these Biblical requirements followed by the Muslims who carried out these murders for retaliation? No.  No judicial process, not witness testimony, the victims were unrelated to any individuals who may have undertaken any specific acts against Muslims.  Nothing – not one aspect of the righteous legal requirement was followed.  This was pure mass murder.

What if the state is unable or unwilling to undertake the task of establishing justice?

Then it falls to the people – including Christians – bring it about:

“If anyone a captivity doth gather, into captivity he doth go away; if any one by sword doth kill, it behoveth him by sword to be killed; here is the endurance and the faith of the saints.” [Revelation 13:10]

What if the state is opposed to justice and aids and supports the murders, as happens in many Islamic states?

Yes, both these verses are the same, but both variants and almost every combination in between appear in the texts we have.  Both can be true, but in different circumstances.

Christians have a reasonable expectation that justice be done, and where they can they should work to bring it about.  Forgiving perpetrators is a matter of the heart, but the civil debt should still be paid.  Otherwise the land, the nation, even the earth, lies defiled by the injustice that remains.

As Christians we want the following for the Crime of the Sri Lanka bombings and all the murders that happen, such as those in Nigeria:

I implore all Christians in all nations to work towards this.  If Christians can, they should reject unlawful authorities that do not qualify as governments in that they neither are ‘a terror to those who do evil not do they reward those who do good.’ [Romans 13]   This is ideally done through democratic means.

If the only way of preventing the bloodshed of Christian communities is through the physical defence of our women and children, then let Christians work to build the necessary defences above or below ground and defend them against those who would commit such crimes.

Let churches improve their security through intelligence, searches, guarding, training, blast and bullet barriers.  Let us deny the murderers the opportunities to do evil.  Let us expect those to whom we pay taxes to defend the nation to include the Christians in the roll of the people of the nation, for that is fair.  Let us hold them to account when they do not.  If they do not because they are Muslim let us point out their partiality is unjust and incompatible with common law.  If they refuse in order to spread Islam by force, then let us resist their injustice and point out the wrongfulness of their viewpoint and actions – as all it creates is a river of blood of the victims.  The victims have given enough blood – the river is bursting its banks.

The truth is that Islam cannot win. It can only loose. Our prayers are with the victims’ families tonight. God bless you all.