Peace to Prosperity? The Trump Peace Plan and its implications 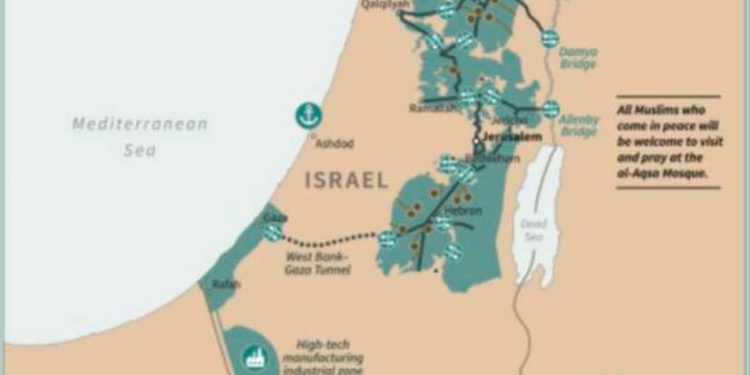 The Trump Peace Plan is a Vision to establish a ‘Palestinian’ State in the Biblical heartland of Judea and Samaria, also known nowadays as the ‘West Bank’.  It outlines how the ‘Palestinians’ can have a self-governing region as their own, on condition that is demilitarised, i.e. free of heavy destructive weapons and air power, i.e. no manned or unmanned aircraft nor anti-aircraft systems.

This is in many way similar to the Marshall Plan for Germany at the end of the Second World War, a situation that allowed Germany to rebuild after its defeat at the hands of the Allies.  It enabled Germany to become the most prosperous nation in Europe, free of the burden of its own defence.

This plan comes with two major concessions: one for Israel to make, and one for the Arabs.

Israel must give up its hopes to have its ancient lands restored to it.  Indeed, the Bible makes it clear that God will have a complaint against the nations in the latter end of days (i.e. our time): ‘They have divided my land.’ [Joel 3:2]. As a result of this and other matters, God will judge the nations when He, Christ, returns.   So, giving up these lands is no small thing, and arguably is a disaster for the world as well as for Israel.  It appears to solve the problem, but in the end may make it far worse.

The Arabs, or more relevantly, the Muslims, who live in the West Bank or Gaza, have made it abundantly clear that the peace they want is when there are no more Jews living, either in Israel or anywhere else for that matter.  Their conception of peace is a totally successfully concluded genocide of the Jews: anything else is an afront to the will of Allah.  Since this plan is not this final outcome, they have consistently rejected it, for to accept it is regarded by them as a betrayal of their ‘sacred’ (!) duty to destroy the Jews and the Jewish State.  However, some Arab states who are rather more pragmatic have indicated their support for the plan.

The Palestinians have three options.  They can accept the plan and its principles and become a genuinely peaceful and prosperous nation with a state like Germany, albeit rather smaller.  Or, they can appear to go along with it but secretly seek to pervert it, using the plan as a staging post for building up their strength in readiness for the day when they can, together with Muslim allies, break out against their Jewish neighbours and fulfil their Quranic dreams of annihilation.  Or, they can reject it out of hand.

My fear is that they will choose the middle option.  It feels like this prophecy from the book of Ezekiel:

‘The word of the Lord came to me:  Mortal, prophesy against the prophets of Israel who are prophesying; say to those who prophesy out of their own imagination: ‘Hear the word of the Lord!’ Thus says the Lord God, Alas for the senseless prophets who follow their own spirit, and have seen nothing!  Your prophets have been like jackals among ruins, O Israel.  You have not gone up into the breaches, or repaired a wall for the house of Israel, so that it might stand in battle on the day of the Lord.  They have prophesied falsehood and lying divination; they say, ‘Says the Lord’, when the Lord has not sent them, and yet they wait for the fulfilment of their word!  Have you not seen a false vision or uttered a lying divination, when you have said, ‘Says the Lord’, even though I did not speak?

Therefore thus says the Lord God: Because you have uttered falsehood and prophesied lies, I am against you, says the Lord God.  My hand will be against the prophets who see false visions and utter lying divinations; they shall not be in the council of my people, nor be enrolled in the register of the house of Israel, nor shall they enter the land of Israel; and you shall know that I am the Lord God.  Because, in truth, because they have misled my people, saying, ‘Peace’, when there is no peace; and because, when the people build a wall, these prophets smear whitewash on it.  Say to those who smear whitewash on it that it shall fall. There will be a deluge of rain, great hailstones will fall, and a stormy wind will break out.  When the wall falls, will it not be said to you, ‘Where is the whitewash you smeared on it?’  Therefore thus says the Lord God: In my wrath I will make a stormy wind break out, and in my anger there shall be a deluge of rain, and hailstones in wrath to destroy it.  I will break down the wall that you have smeared with whitewash, and bring it to the ground, so that its foundation will be laid bare; when it falls, you shall perish within it; and you shall know that I am the Lord.  Thus I will spend my wrath upon the wall, and upon those who have smeared it with whitewash; and I will say to you, The wall is no more, nor those who smeared it—  the prophets of Israel who prophesied concerning Jerusalem and saw visions of peace for it, when there was no peace, says the Lord God.’ [Ezekiel 13:1-16]

You may think I am being a bit harsh, but giving a people who want you dead lots of prosperity and a home within your own heartland to assist them achieve their final goal strikes me as not way to build a resilient and lasting national homeland.  The Trump plan assumes that when the Palestinians say they will demilitarise, they mean what they say.  Hmm, that’s quite an assumption, that.

The leaders of the world are desperate for a solution to the Israel-Palestinian conflict.  So, this plan represents the best attempt yet to get to a solution.   Everyone who reads this: the UN, the Israelis, the Palestinians, other Muslim nations, Christian commentators (like me!) can find fundamental problems with it, things in principle they really do not like.  And there lies its cleverness: everyone feels they have to give up something fundamental.  And that is why, I think in the end it will find mixed support.  Fatah will appear to accept it, while then telling their constituents in Arabic that this is a clever strategy to build up their strength for that Great Day when they will finally breakout against the Jews and triumph.  Hamas will reject it, because it will require them to obviously betray their own founding charter that calls for Jihad against the Jews.  What would probably happen then is that the West Bank half of the plan would be implemented, and Gaza will remain as it is.

If Fatah were to continue to reject the plan, the consequences for them is that the world will run out of patience with them.  They will no longer get the funding they depend on, not least from the EU.   Many Arab nations have already grown tired of them.  Iran is in no place to prop them up, and if Turkey tries to fulfil that role, it will find it simply cannot afford it.

So, the Palestinians will either loose and choose to leave, or fight a last desperate struggle and be driven out.  Either way, it does not end well for them, being rejectionist.  So, I think after a lot of bluff and bluster they will adopt this plan, and then spend the rest of the century building up their strength to break out.

What would have been a better plan?   Good question: everyone leave well alone and stop interfering, perhaps.

As a final word, this plan has wider implications for stateless nations, of which the ‘Palestinians’ are but one, and by no means the largest.  If I were a Kurd, a Catalonian, a Basque, a Christian Dega in Vietnam, or a Christian in West Papua, I would be looking at this plan very carefully, because it represents the best thinking for how to try to resolve the issue of intractable statelessness.   If this plan can work for a Palestinian whose hate-filled dream is annihilation the Jews, how much more should similar plans work for all those peoples who dream of freedom from oppression or self-determination but who harbour no such hatred for their neighbours?  If the UN wants to do something useful, it could so a lot worse than take the Trump plan and adapt it to the lasting benefit of all the other stateless nations around the world.

The Bible says that when Christ returns, He will break up the nations like shards of pottery.  The implication is that the end state of nations will be small principalities rather than massive blocks, a logical and just outcome for a world where ‘Nation will not take up sword against nation, nor will they train for war anymore’ [Micah 4:3].  Given that, the future of this world we can look forward to is where all nations who wish to govern themselves can do so, and their neighbouring principalities will collaborate with them rather than seek to oppress them, recognising that the more states are friendly to one another, the better off and more resilient they will all be.  Now that is a vision worth working towards.  And why are they to be principalities?  Because there is only one King, and He is Christ the Lord.

Next time, I will get back to the theme of Christian strategy in an age of hydrocarbon-enriched Islam.

The Lord bless you

Seven Sayings of Jesus on the Cross

The End of the United States of America?