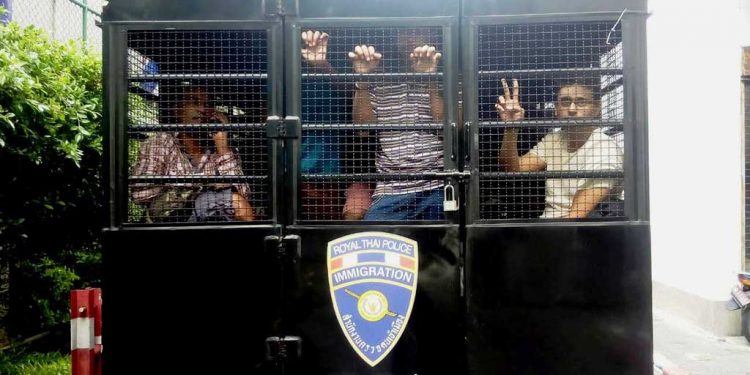 2,500 Pakistani Christians´ fate is hanging in an endless limbo. They fled their homeland where they faced persecution and found shelter in the skyscraper city of Bangkok. They filed their protection applications with the United Nations High Commissioner for Refugees in Thailand in the hope that they will be heard and provided a safe haven. UNHCR is a huge institution immense resources, but it has completely failed their hopes and let them down.

According to the “Open Doors” organization, Pakistan is the 5th most dangerous place on the earth for living as a Christian. Christians in Pakistan are discriminated against daily. Muslims often falsely accuse Christians of committing blasphemy as a way of undertaking personal vendettas, stealing property or capturing Christian women in abusive loveless relationships. Blasphemy law has become an easy tool for Muslims to persecute the Christians. Burning Christian housing estates, lynching Christians in mob violence and attacking churches have become the favourite hobbies of radical Muslims.  Despite this, the UNHCR continues to refuse the majority of Christians´ protection applications, saying they won’t be harmed in Pakistan, when they know this is not the case. The highest refugee authority in the world, established for the purpose of protecting refugees, has become the principal international organ denying those rights.

Even if some Christians are granted refugee status by UNHCR, they are then not resettled to safe third nations. Tens of Christian families who are recognized refugees are still waiting for a call from UNHCR for with good news of resettlement, but the call never comes.  So, they are forced to live in a country which considers them no more than illegal immigrants. They constantly live under the fear of being caught by the Thai police and Immigration authorities and taken to the infamous Immigration Detention Centre which is chronically overcrowded, disease-ridden and devoid of medical aid, even painkillers, for everyone including those with serious medical conditions.

The Pakistani Christian community in Bangkok is not allowed to work legally, they receive no financial support from the UNHCR, which receives funding on the name of protecting and serving refugees, and which proclaims to be the mother organization for refugees. Their children cannot go to school, and 16 Pakistani Christians have lost their lives in Bangkok in last 4 years due to the lack of medical assistance.

Above all constant immigration raids turn the refugees’ lives upside down. Just in the month of October 2018 over 150 Christians have been arrested and thrown into the Immigration Detention Centre. Those who were granted temporary bail are also treated like criminals and are then dragged back behind bars with the threat of deportation back to the land that wanted them dead.

A rich Christian country´s leader is busy in airlifting Syrian Muslims to safety, another worldwide known Christian personality is busy in appeasing Muslims by washing their feet, as those they were Christian disciples, other prominent Christians are overturning Biblical law and campaigning for  homosexuals ‘rights’, and other Western leaders are protesting about the treatment of Muslim Rohingyas (who have been violent and militant for scores of years) but no Christian leader it seems is willing to observe the terrible injustice these Christians in Thailand are facing, presumably because helping them won´t bring any political capital or financial benefit.  After all, these refugees are not Muslims.

It is indeed a complete waste of time and resources to help this little group of people which does not make any headline in newspapers! They deserve to be abandoned and forgotten because they decided not to compromise with their faith, and they continue to adore Christ at any price! That surely makes them the scum of the earth.

However, those Christian leaders who ignore today the plea of these vulnerable Christians must remember what Jesus said in the following verses:

If they don’t remember these verses today, they can be absolutely certain Jesus will remind them on the Day of Judgment.

Obedience is rewarded by God