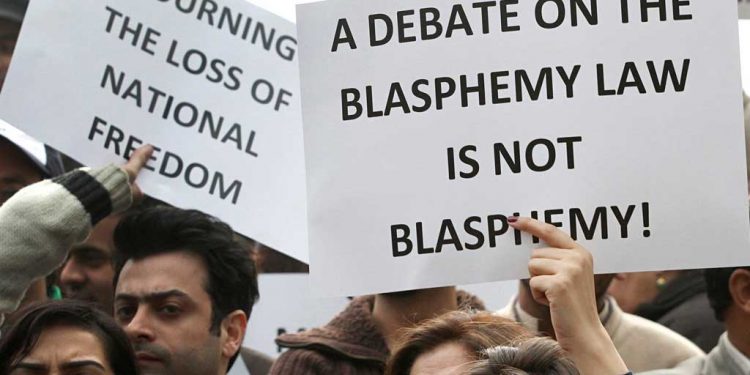 Blasphemy: A Term used by radicals to protect the contradictory beliefs in Islam from being proved corrupted. The religious sensitivity of Pakistani Muslims is beyond insane. As little as a gesture of asking for explanation of a belief could end up as being blasphemy. The crazier fact is that anyone can be blamed with blasphemy in Pakistan because even repeating the words would be blasphemy. It is as easy as lifting a spoon since no evidence is necessarily required when it comes to investigating a blasphemy charge. Witnesses can be easily bribed for falsely claiming and judges and jury could be pressurized with equal ease. The sentences for blasphemy could result in execution or life imprisonments but even those who are legitimately acquitted by the courts are plainly rejected by the society. Once a blasphemer is always a blasphemer. It is due to the extreme radicalism that the alleged blasphemers have to flee the country even when the charges are acquitted, they remain at serious risks of being tortured, killed or as it is the new norm these days: being burnt alive.

Why so much intolerance for innocent humans? Rimsha Masih an eleven year old minor was charged with blasphemy! A serious crime carrying the death penalty. This is outrageously inhuman and sheer stupidity. After immediate intervention of the international community she was freed of the charge but still had to flee Pakistan with her family due to the serious risks. This law gets stupid to the extent that even accidently stepping on a piece of paper that has a Quranic verse or anything Islam related could be counted as blasphemy! Next time you hear someone visiting Pakistan, do warn them to watch their step because from anything to everything could be framed as blasphemy and no one will listen whatever you are saying. There is no life in Pakistan even after being freed from the curse of blasphemy, the only possible and wise decision is to secretly leave the country.