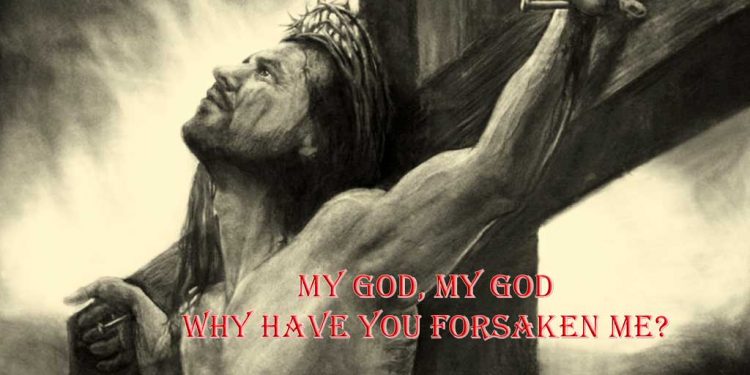 “My God, my God, why have you forsaken me?” This statement Jesus made while he was on the Cross, and some have argued that this shows Jesus was not the Son of God or divine in any sense.  But is that really so?

To understand this saying properly, we need to see the larger picture. Putting the accounts of the crucifixion together from all four Gospels written by Matthew, Mark, Luke and John, we can construct the following composite historical account. Please feel free to view these accounts for yourself and check the accuracy of my construction:

And they came upon the place which is called The Skull, called in Hebrew, Golgotha. Now it was the third hour {i.e. 9:00 AM} when they crucified Him and two others with Him, on this side and on that side and Jesus in the middle. Jesus said, “Father, forgive them; for they do not know what they are doing”. Therefore the soldiers, when they had crucified Jesus, took his garments and made four parts, a part to each soldier, and also the tunic. Now the tunic was seamless from the top, entirely woven. Therefore they said to one another, “We should not split-apart this tunic, but should do a lot concerning it; whose it will be.” This happened in order that the Scripture might be fulfilled, which says, ‘They divided my garments among them and they cast a lot for my garment.’ {Ps. 22. 18} Therefore indeed, the soldiers did these things. And sitting down, they were guarding him there.

Now those who travelled by were blaspheming Him, wagging their heads  and saying, “You who said he will tear-down the temple and build it in three days, save yourself. If you are the Son of God, come down from the cross.”

Now likewise, the people stood viewing, also the high-priests with the scribes and elders, mocking Him, and were saying, “He saved others, but yet he is not able to save himself. If he is the King of Israel, the Christ of God, his chosen; let him now come down from the cross and we will believe in him. He has confidence in God. Let him rescue him now, if he is willing to save him; for he said, I am the Son of God.”

Now one of the criminals who hung there, was blaspheming him, saying,” If you are the Christ save yourself and us!”

But answering, the other was rebuking him, saying, “Do you not fear even God, because you are in the same condemnation? And we indeed suffer righteously; for we are receiving worthy payment of what we practiced, but this man has practiced nothing improper.” And he said, “Jesus, remember me Lord, whenever you come in your kingdom.”

And He said to him, “Assuredly I say to you, today you will be with me in Paradise.”

Now there became darkness upon all the earth from the sixth hour until the ninth hour {i.e. Noon until 3:00 PM}. 27:46 And in the ninth hour {i.e. ~3:00 PM} Jesus cried with a loud voice, saying, “Eli, Eli, lama sabachthani?” which is, after being translated, ‘My God, my God, why have you forsaken me?’ {Ps. 22:1} But some of them standing there, when they heard it, were saying, “This man is summoning Elijah.”

After this Jesus, knowing that all things have been accomplished, that the Scripture might be accomplished, says, “I am thirsty.” {Ps. 69:21} And immediately one out of them ran, a vessel was laying full of vinegar, and having filled a sponge with vinegar and having placed it around a hyssop, they brought it to His mouth. But the rest were saying,” Allow it, that we may see if Elijah comes; he will save Him.”

Jesus said, “It has been accomplished.”  “Father, I will consign my spirit into your hands.”

And having said these things, He expired, He bowed his head and gave up the spirit.

And the sun was darkened and the curtain of the temple was split-apart in the middle into two pieces, from the top to the bottom.

Now when the centurion saw what had happened, he glorified God, saying, “This was really a righteous man”. And all the crowds that came together upon this scene, viewing the things that had happened, were returning, beating their chest. Now all his acquaintances and the women who followed from Galilee together with him, stood from afar, seeing these things.

One piece of context that may also help us to understand these words of Jesus is that at 3pm, ‘the ninth hour’, the Passover lambs would have started being killed. The Jewish Passover is where they celebrate their rescue by God from slavery in Egypt and the miraculous crossing of the Red Sea on dry land. When Jesus started His ministry, John the Baptist said of Him some three years before the crucifixion, “Behold, the Lamb of God, who takes away the sins of the world.”

So, we can set out what was happening as a result of Jesus’ crucifixion, the most agonizing execution method the Romans ever devised, and explain Jesus statement.

See, my servant shall prosper; he shall be exalted and lifted up, and shall be very high. Just as there were many who were astonished at him—so marred was his appearance, beyond human semblance, and his form beyond that of mortals—so he shall startle many nations; kings shall shut their mouths because of him; for that which had not been told them they shall see, and that which they had not heard they shall contemplate.

Who has believed what we have heard? And to whom has the arm of the Lord been revealed? For he grew up before him like a young plant, and like a root out of dry ground; he had no form or majesty that we should look at him, nothing in his appearance that we should desire him. He was despised and rejected by others; a man of suffering and acquainted with infirmity; and as one from whom others hide their faces; he was despised, and we held him of no account.

Surely he has borne our infirmitiesand carried our diseases; yet we accounted him stricken,struck down by God, and afflicted. But he was wounded for our transgressions,crushed for our iniquities, upon him was the punishment that made us whole and by his bruises we are healed. All we like sheep have gone astray; we have all turned to our own way,and the Lord has laid on him the iniquity of us all. He was oppressed, and he was afflicted,yet he did not open his mouth;like a lamb that is led to the slaughter, and like a sheep that before its shearers is silent, so he did not open his mouth. By a perversion of justice he was taken away.

Who could have imagined his future? For he was cut off from the land of the living, stricken for the transgression of my people. They made his grave with the wickedand his tombwith the rich, although he had done no violence, and there was no deceit in his mouth.Yet it was the will of the Lord to crush him with pain.

When you make his life an offering for sin, he shall see his offspring, and shall prolong his days; through him the will of the Lord shall prosper.

Out of his anguish he shall see light; he shall find satisfaction through his knowledge. The righteous one, my servant, shall make many righteous, and he shall bear their iniquities. Therefore I will allot him a portion with the great, and he shall divide the spoil with the strong; because he poured out himself to death, and was numbered with the transgressors; yet he bore the sin of many, and made intercession for the transgressors.