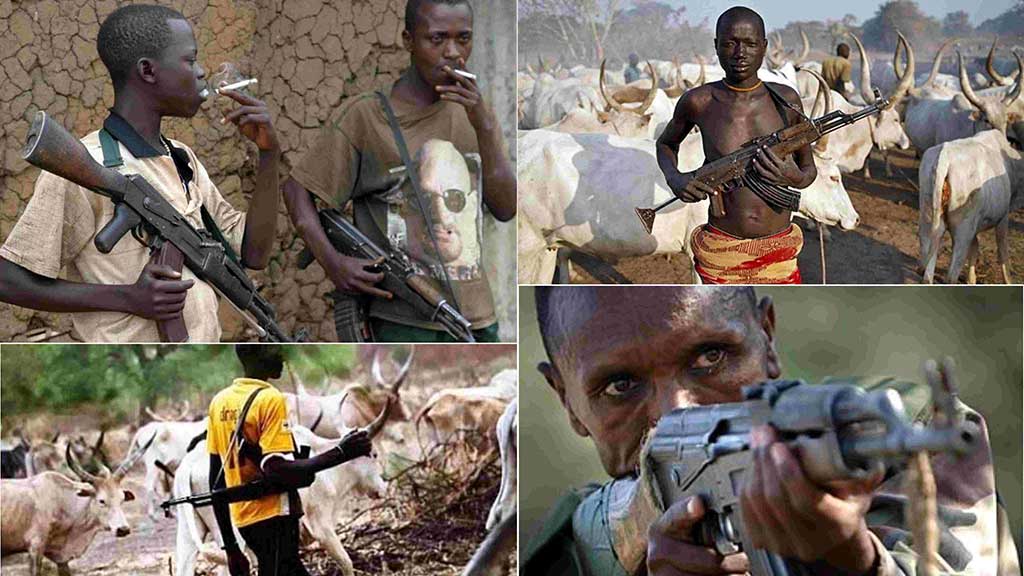 What is happening in Nigeria is a foretaste of what may happen in many other nations where the population of Muslims is on a par with the rest of the population.  If current demographic trends continue, Western Europe will be in this situation in the second half of this century.  Therefore, Christians in Western Europe need to look at Nigeria to understand what will happen and how to prepare for it.

Christians in many states in Nigeria face a two-fold Muslim enemy.  In the foreground are groups like the Fulani tribesmen and Boko Haram, who ambush travellers and attack villages and even towns with both melee weapons (knives, machetes and clubs) and firearms (submachine guns, heavy machine guns, grenades, IEDs and mortars).

In the background is the Nigerian government and their armed forces, whose well-documented  practice is, generally, to stand by while attacks are underway, only intervening to kill Christians who defend themselves rather than obediently die to run away.  It has been reported that even the Nigerian Air Force has bombed Christian defenders to protect Fulani fighters.

This is happening in a democratic country with one of the largest economies in sub-Saharan Africa.  What distinguishes this country is that Muslims have a slight majority and tend to win presidential elections.

This war of Islam against God’s people reminds us of the ‘Beast’ in the Book of Revelation, chapters 13 and 14, who ‘wages war against the saints, and overcomes them[1].’  There are several statements about the Beast that, from our vantage point of history, now allow us to confidently identify the Beast of the Book of Revelation as Islam, an identification that the Orthodox Church has made for over a thousand years.

A question to ask is whether the Bible gives Christians any clue as to how to endure this war.  A careful reading of a literal translation of the Book of Revelation (not a sloppy one) gives us a clue.

First, we read in many places that all those who dwell ‘upon the earth’, or ‘upon the land’, will bow to the Beast, i.e. obey and comply with the demands of the Beast.  We know what Islam routinely demands: convert to Islam, pay the jizya or die.  So logically, if the Beast is Islam, not to bow to the demands of Islam is to neither convert, nor pay the Jizya, nor die.

Then the question becomes, ‘How?’

The second clue in the book is found in Revelation 5: 13; ‘Every creature that is in the heaven, and in the earth, and under the earth, and the things that are upon the sea, and the all things in them, heard I saying, `To Him who is sitting upon the throne, and to the Lamb, is the blessing, and the honour, and the glory, and the might — to the ages of the ages!’

We can be confident that John is being precise in his language because the phrase ‘upon the earth’ is found frequently only in the Book of Revelation.   In the Old Testament, the books from which the Book of Revelation derives much of its phraseology, people are described as generally living in the earth, as are the trees.  So John, speaking under divine inspiration is, for those who search the Scriptures, drawing us to make the distinction with those who live upon the earth in contrast to those who live in or under it.

What does this mean?  To endure in the last days, Christians will have to use the earth in the same way many historical peoples used the earth: they dug down into it to make their dwellings and communities, and even tunnelled into it to defend themselves from their enemies, or wild animals.

We see similar behaviour in many mammals, who make dens or live in small caves.  Even modern armies dig into the earth to protect themselves from the overwhelming firepower of the enemy, enabling them to fire on the enemy with much greater endurance.  Often the effectiveness of a battle plan depended on the effectiveness of the field fortifications with lines of covered trenches, firing points, ammunition stores and bunkers too deep for effective damage from artillery or aerial bombardment.

Therefore, by constructing 10 metres below the surface into drained ground, with the right system of gated tunnels and air and exhaust dusts, and no modern weapons will make a significant impression on sheltering troops, nor a sheltering population.

Well-designed firing points will make it much harder for attacking forces to press-home their attacks and, if defended, will make it a costly exercise for them.  Firing points, walls, fences, thorn hedges, hedge-filled ditches and embankments would all be examples of dwelling ‘in the earth’ as opposed to ‘under the earth’.

Every wall needs three things to be effective: multiple barriers to slow down or deter an attacker, a watch with communications to give adequate warning and information about the attack and the means to respond and defend against attackers.

In Europe in the Middle Ages, most churches and monasteries had passive defences such as walls, strong doors, towers (for a watch) and slit windows for firing points.  Churches were built as much as a means of defence as a place of worship.  The Christians were not going to be driven out.  After the persecutions of the Roman Empire and other pagans, they were careful not to trust themselves to their neighbours, while at the same time seeking to love them in Christ.

I remember once going to the medieval Spanish town of Salamanca, which was a centre of resistance during the early part of the Reconquista against the Muslims.  An early church still stands, The Round Church of San Marcos, whose design make a small fortress, with narrow slit windows (to make it difficult for fire to be hurled into the church), thick round walls (to make battering ineffective) and a massive iron-reinforced oak door.  This was not just a church building, it was an expression of their determination not to bow to the Beast.

If you read the prophet Ezekiel, starting at chapter 40, you will read a prophecy concerning the Temple that will be built when Jesus returns.  It will be, in effect, His home on Earth.  Its design is described in detail.  It is as much fortress as Temple, with three massive 30-metre high gatehouses each with twelve multi-storey slits windows, a three-metre thick defensive wall and what seem to be steel gates 500 mm thick with massive hinge posts.   Even the King of all the Earth will be wise concerning is His security.

The apostle John in one of his letters wrote: ‘As he is in the world, so are we.’  While this is a reference to us being loving in the world, it equally must apply to our level of trust of others whose intentions may be malign.  In the Gospels it is written that Jesus ‘trusted Himself to no man’, and we would do well to do likewise.

Much modern building follows the European (or Colonial) pattern, of windowed houses, open thoroughfares and thin doors.  The level security designed into most buildings is little more than the security provided by one of those red velvet ropes used to close off corridors to the public in a museum.  The assumption that lies behind this European design is that we live in Christian peace with one another for we are all (or mostly) law abiding.

Even the picture we are given of heaven at the end of the Book of Revelation is a picture of a continent-sized city designed as a tree-crop farm defended with an enormous outer wall, massive tough gates and seemingly no visible buildings, as they are all subterranean, it seems.  Heaven is a place of eternal rest, partly because it is a place of eternal security.  Something in addition to a spiritual hope is being communicated to us here.

King David describes His relationship with God in terms he understands as a warrior.  For him, God is his ‘wall of fire’, or ‘wall of water’ or ‘wall of thorns’ or his ‘high tower, and he is able to run into it and be saved.’  All these metaphors would have been part of his experience.

As well as encouraging the Christians to ‘keep the commands of God and the faith of Jesus’ [Revelation 14] this book of end-time prophecy has also something vital to teach the Christians of Nigeria, and all of us, about how we can endure the onslaught.

It is time to get to work.  The Lord be with you,

This article is a continuation of an occasional series on Christian Strategy in the Last Days, exclusively for Jesus Christ for Muslims.

[1] In Scripture the term ‘overcome’ is used of a force who overcame an army who then fled.  We are called to ‘overcome evil with good’.  It does not imply that there is no more evil, only that evil was not able to achieve its goal.