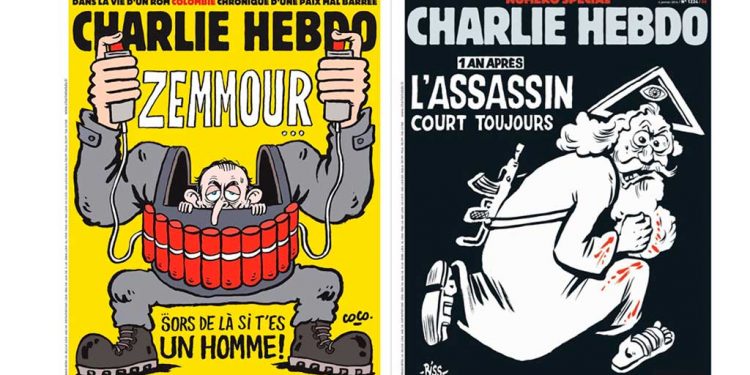 Charlie Hebdo is a French satirical magazine whose staff were mostly murdered by jihadist gunmen after the magazine published a cartoon of Mohammed.

The magazine now avoids making fun of anything to do with Islam and instead mocks those who oppose Islam, such as Éric Zemmour, the brave French journalist at Le Figaro who has led a public debate about French identity. “Islam is incompatible with secularism, incompatible with democracy, and incompatible with republican government,” wrote Zemmour. The left panel of the image above depicts Zemmour as a suicide bomber. This of course takes enormous courage on Charlie Hebdo’s part, because Zemmour might attack them by writing an article, perhaps.

The magazine also mocked the Judaeo-Christian God, depicting him as a terrorist: ‘L’assassin court tourjours.’ ‘The assassin is still running.’ This, of course also takes enormous courage on Charlie Hebdo’s part, to blaspheme the Biblical God like this. After all, God might do what his Word says: ‘The Lord. . .is longsuffering towards us.’  2 Peter 3:9. I am sure the new editorial staff are being terribly courageous in standing up to the Lord’s longsuffering of them.

‘Je ne suis plus Charlie Hebdo.’ ‘I am not Charlie Hebdo anymore.’ For the staff of this satirical paper now only attack those who values are such they are safe to attack, which means they are betraying those who are fighting against there being more massacres, or attacking those religions which are against the bloodshed of the innocent. They don’t want any more workplace violence after all. This is the Stockholm syndrome at work, people finding in themselves the rationalisations to be nice to their murderers, because it is in their short-term interest to do so. In so doing they betray themselves, they betray the memory of those who died and they betray their values. That is how the West will continue to be lost until we find our courage again. R.I.P. Charlie Hebdo. You no longer have anything left worth saying.