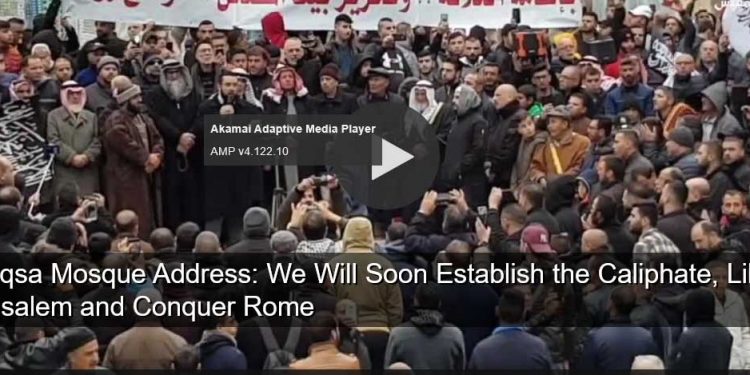 ‘On January 17, 2020, a video was uploaded to the Internet of an event at the ‘Al-Aqsa Mosque’ in Jerusalem on the anniversary of the 1453 AD capture of Constantinople by the army of the Ottoman Empire, commanded by Sultan Mehmed II. The event at the ‘Al-Aqsa Mosque’ was held by Hizb ut-Tahrir. Palestinian preacher Nidhal “Abu Ibrahim” Siam spoke before the crowd and said that the anniversary of the fall of Constantinople brings tidings that Rome will be conquered in the near future.

He told the crowd that their real task is to wage jihad for the sake of Allah and to make the word of the infidels inferior to the word of Allah.

In addition, he called on them to seek martyrdom for Allah. He added: “Do not obey the followers of Satan [and] those who collaborate with America, Russia, and the West.” The crowd chanted: “This Al-Aqsa [Mosque] will be liberated… The Caliphate was promised by Allah… By means of Caliphate and the consolidation of power, your conquest, oh Rome, is a matter of certainty… Allah Akbar!” ‘[Source: With thanks to MEMRI, 22 January 2020].

It is instructive to compare these expectations with Biblical prophecy.

First, let’s us consider the similarities.  In the book of Revelation, the vision given to St John concerning the future speaks of a coming empire known as the Beast.  This Beast is depicted as ‘waging war on the saints and overcoming them.’  It requires the world to bow down to the Dragon, aka Satan, and to the Beast itself.  Those who ‘live upon the earth’ will do so.

Many Islamic preachers preach about taking Jerusalem for Islam, and indeed the whole world.  And the Bible depicts that the Beast, if it is Islam, and it certainly seems to be, will have great success, and prior to the final battle successfully desolating and destroying with fire another great power, called in the Bible ‘Babylon the Great’, also known as ‘the Great Whore’.

Babylon the Great is very strong and very rich, and for a time ‘rides’ the Beast, but in the end is destroyed by it, never to rise again.  The USA or Europe may, possibly, be Babylon the Great, but the end is not yet and as yet scholarship cannot tell us with certainty.

If it is Europe, then ‘Rome’ may be a plausible short-hand for what the Bible calls Babylon the Great.  If I had to choose right now, I would say that Babylon the Great is the USA, but I cannot be sure.

The Beast then gathers all the nations and their armies of the world to Har Megiddo – the Hill of Megiddo – in the Jezreel Valley in Israel’.  From another prophecy, in the Book of Zechariah, we read that this world force then fights three battles.  The first is against the Jews, which does not go well.

Then the Jews convert to faith in Christ, ‘mourning him whom they have pierced’.  Preferring and choosing to stop fighting, the invaders march on Jerusalem, sack it, deport half the men into exile, and rape its women.

Jesus, in his discourse on the end of the age, describes a moment as the ‘Abomination of Desolation’, a moment when, in a prophetic statement by St Paul, the leader will enter the Temple and will declare himself divine.  This leader is referred to by St John as the ‘anti-Christ’.

Soon after this, when the world, who out of fear are in thrall to the Beast, are saying to each other, ‘Who is able to war against the Beast’ [Revelation 13].

Then the situation departs completely from the Islamic Dream of domination.  The Lord returns, and ‘every eye will see Him’.

This completely deranges of all the world’s efforts to sweep away the Biblical peoples and the Biblical truth and its principles, and is so cataclysmic for the people that they take the collective decision to ‘wage war against the Lamb’ and the myriads of angels who have appeared in the sky with Him.  Whatever inferiority the Word of God may appear to have to the world of Allah, it seems He who is the Truth has complete victory over every edifice ‘raised up against the knowledge of God’, as St Paul put it.

The result is that the Beast and the armies are destroyed ‘by the sword of His mouth’.  Zechariah states that ‘that their tongues and eyes will rot’ and that the armies will attack each other.  It is a complete destruction.  Jesus is depicted as the warrior, his tunic covered in the blood of his enemies.

Despite the great bloodletting of the saints that the Beast and others engage in, attempting to eliminate the Biblical peoples, according to the Scriptures, in the end all of their hopes are dashed by the reality of the true Messiah returning.  For from it being a victory for the Beast, in the end they are all killed and go straight to hell, a place of fire and sulphur that burns for eternity, according to the Bible [Revelation 19].  And that is the end of the Beast – it has no future.

This time in the World’s future is known as the ‘Valley of Decision’.  The individuals that make up the peoples, armies and nations who go to Israel to do battle have all made a decision, to oppose with everything they have Christ, the Bible, and the Biblical God and its peoples.  Those who don’t, those who refuse to submit to the Beast, or refuse to submit to the attempts by their governments or their neighbours to abandon their faith, are either killed or live in hiding, in the mountains and hills, in the forests or in the ‘dust of the earth’.   These are they whom the Book of Revelation describes being ‘in the earth’, not merely ‘upon the earth’.

These believers freely choose to live like this, humbly and far from creature comforts, and many if not most of them perish, being captured, torture and murdered, but the Biblical promise is that they will be raised by God and return with Christ on that great day, known as the Day of God.

Many other things happen during this time, according to the Scriptures, but space prevents me from explaining these now.

The parallels between the Biblical depiction of the Beast and Islam are too similar and striking to ignore, and so I have concluded that the Beast of revelation is, indeed, Islam.

When Islamic preachers encourage their hearers to wage jihad, establish the Caliphate, take ‘Rome’ and Jerusalem, they seem to believe that this is a path to a great victory and a glorious future.

According to the Bible, they are fighting against Christ Himself, and because He IS God, He will execute His awful fury and vengeance upon them.

Why?  Why should Christ be cross with these Muslims?  Because they ‘waged war against the saints, overcoming them’ and killing millions of innocent men, women and children.  That does sound to me like a reasonable reason for God to be furious and, as a result, deal with them ferociously.

We are all, it seems, in the Valley of Decision.  And the choice is getting more stark, more clear, more decisive, every year that passes.

Our eternal future is not in the end decided by the political or military battles we fight, but it is decided by the righteousness we do, or don’t do. And that starts by choosing who to believe.

If you think your future hope lies in going to Israel, waging jihad and taking Jerusalem exclusively for Allah, you should ask yourself if the God of Israel, the Great Tactician, is not going to put you exactly where you deserve.

The Lord bless you all,

Do not seek revenge