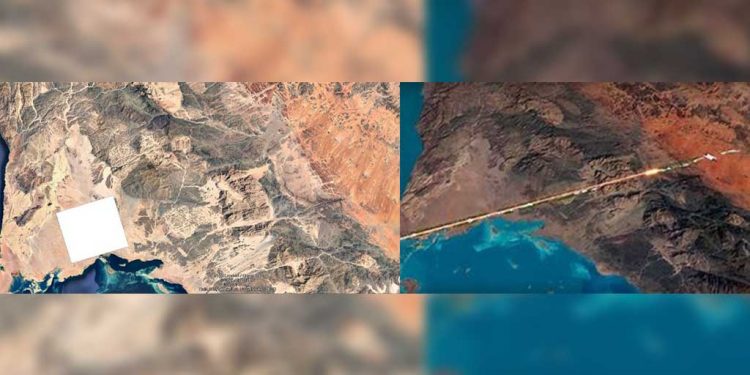 This is not the usual kind of article we publish on Jesus Christ for Muslims, but occasionally something happens that just needs a comment.

A few months ago, the Government of Saudi Arabia announced a new city, called Neom, which would be planned as a linear city stretching 170 km through the province of Tabuk in north western Saudi Arabia.

In their promotion they state the following: “The contemporary city needs a full redesign.”  I could not agree more.

Given the enormous challenges the world in the 21st century faces in terms of climate change, resource constraints and risks to security from many quarters, what is it about the contemporary city that makes it so central to resolving so many of these?

Now we know that the scale of these extractive processes cannot be sustained, with the most urgent need being to transition away from fossil fuels, the impact on cities will be most profound.  Cars and trucks, building lighting, heating and cooling, water supply, food preservation – all of these processes fail if there is insufficient fossil fuels, it would seem.  And to keep the world from damaging or runaway climate change, ceasing to use fossil fuel seems to an essential condition.

Neom is one grand response to these pressures.  However, to house one million people the budget for Neom is $500 bn, that is $500,000 for every man, woman and child in the city.  This is an expensive solution, one that would probably price the city out of the global competitive marketplace from the start, it would seem.

But is there another solution, one that is inherently sustainable?

The Bible presents us with a vision of heaven as a city, ‘coming down from God.’  This city is not linear, like Neom, but square, with twelve gates in the city wall.  These gates are described as being the roads into the city, and it seems that by the roads within the city lie rivers, or canals.

In a prophecy in Isaiah there is a mysterious verse, describing a feature of a future Jerusalem on earth, rather than the heavenly city:

“See Zion, the city of our meetings, your eyes see Jerusalem a quiet habitation, a tent not taken down, not removed are its pins for ever, and none of its cords are broken.

But there mighty is Yehovah for us, a place of rivers — streams broad of sides. No ship with oars doth go into it, and a mighty ship doth not pass over it.

Jerusalem lies 700 metres above sea-level in the Judean mountains, yet in Isaiah’s vision he sees Jerusalem with the following features:

‘Thy will be done on earth as it is in heaven’.  So goes the Lord’s prayer.  What if this had not only a spiritual or moral meaning but also a literal meaning.  Supposing the new cities that are needed had its water and transport need met, not with walking and high-speed underground like Neom, but walking and low speed canals, like future Jerusalem?

Surely it would be too slow?  Neom is 170 km long and assuming the trains run at a maximum speed of 170 km/h without stops it will take a train at least an hour to cross Neom from end to end.

Instead imagine a city 20 km a 20 km as a square, criss-crossed by three straight flowing canals in each direction, a total of 6 canals, 120 km in total length, not so very different from the length of Neom.  Using modern boat design with submerged pontoons, a boat can be readily powered at more than 20 km / hour with less drag than a modern bus or a high-speed train.

It would take under an hour to cross our hypothetical city, but without noise, powered by renewable energy and without the need to build expensively underground.  The same system of conduits would supply fresh water to every part of the city, from which local water supply could draw.

Assuming such a city had the same population as Neom, 1 million people, the population density would be 25 people per hectare, around half the density of London.  This would enable such a city to be a garden city, another aspect of the Biblical vision of heaven, in which it is trees, specifically the ‘tree of life’ provide food for its eternal inhabitants.  In an earthly reflection of the Heavenly City, our low-density city has enough land and, if required, irrigation water to provide for much of the food the city’s residents require.

Each canal would be no more than 2.5 km away from every residence, at most 20 minutes’ walk or, if needed, less than 6 minutes cycling time.  It would be economical, pleasant, quiet, safe, leafy, cool in summer, self-sustaining and require minimal energy and technology to run it.  Inherently low cost, it would be an ideal location for undertaking the information-rich work of the future.

Imagine our world approaching 10 billion people, perhaps 70% of them living in an urban environment.  If they lived in such heavenly-inspired cities, they would need 7,000 cities, occupying a total of 280,000 square kilometres, smaller than Italy, and yet meet most of their daily needs from within the footprint of these cities.

As places to raise families and look after the elderly, this vision for such cities seems to have much to commend it.  Indeed, it really does seem the prayer Jesus taught us to pray, including these words ‘Thy will be done on earth as it is in heaven’, may have a literal meaning that has alluded us all until now.  But perhaps, in the nick of time, we might just recognise that possibly we have been given a blueprint for how to live on a crowded planet that could actually work.

But then, if we can really get our minds around this: “For Yehovah our judge, Yehovah our lawgiver, Yehovah our king — He doth save us.”, then we should be so surprised.

Let us take heart, for “mighty is Yehovah for us”.  And that is an encouraging thought. The Lord bless you all,