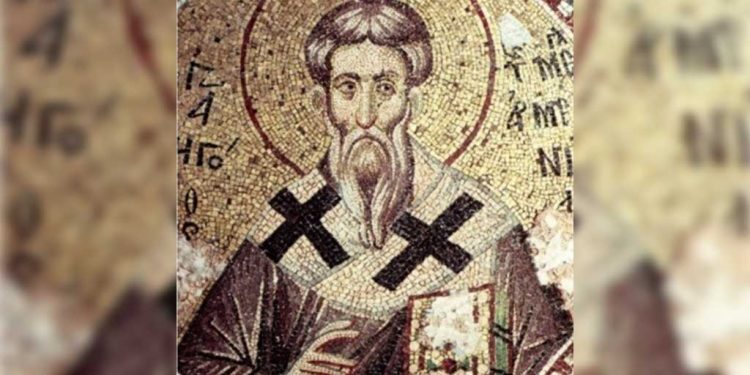 This week marks the anniversary of when it is generally believed that Gregory the Illuminator, the early church evangelist credited with founding the Armenian Church, died.

Himself a native of Armenia, Gregory had become a Christian while growing up in Caesarea in Cappadocia. As an adult, he returned to his homeland to be a preacher.

Having been imprisoned for his faith for 12 years) years in a pit on the Ararat Plain under the present-day church of Khor Virap located near the historical city Artashat in Armenia. Gregory was eventually called forth from his pit in c. 297 to restore to sanity to Tiridates III, who had lost all reason after he was betrayed by Roman emperor Diocletian. Diocletian invaded and vast amounts of territory from western provinces of Greater Armenia became protectorates of Rome.

Declaration of Christianity in Armenia

In 301 Gregory baptized Tiridates III along with members of the royal court and upper class as Christians.  Tiridates III issued a decree by which he granted Gregory full rights to begin carrying out the conversion of the entire nation to the Christian faith. The same year Armenia became the first country to adopt Christianity as its state religion.

“One reason for Gregory’s success was that he preached in the Armenian language. Another reason was that Armenians were strongly nationalistic,” the Christian Historical Institute’s website explains.

“Their country lay on the frontier between Persia and Rome, and if it hoped to survive, it would be through unity and moral character. Christianity strengthened both, especially after monks translated the Bible into Armenian a century after Gregory’s death.”

Armenia remains a Christian nation to this day.  Although suffering many setbacks and much slaughter, they remain faithful to Christ.

May the Lord bless little Armenia, surrounded as they are by enemies much more powerful than they.  May God give them faithfulness, wisdom and obedience.  May He protect them. Amen.