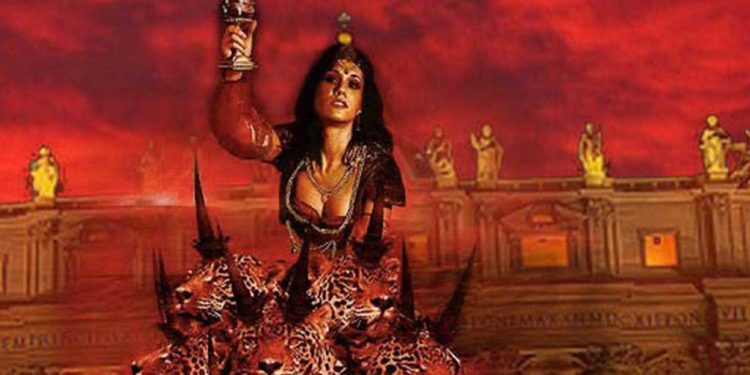 In my lifetime (I am now 65) I have witnessed the transformation of my country, the UK, from being a Christian country, a country in which the laws of God and the example of Christ were respected, even if not always followed, to one in which every law of God in the Bible is broken, the life of Christ is ignored or despised and those who both do these things and promote them enjoy powerful legal protections and total media support.

In a single generation, the UK and the West in general has been changed from being disciplined to being a wastrel, from sexually self-controlled to dissolute, and from being industrious to broke.  All this has happened for a simple reason: the belief that there is no God because evolution proves there is nothing for God to create. (It does no such thing, of course).

All the behaviours the Old and New Testaments warn us about that cause God to come against us in acts of mighty judgment, we practice and celebrate.  We vilify and persecute any who speak against this culture of hedonism.

Do we see the signs of God’s judgments yet?  According to the Bible we can expect a nuclear catastrophe and severe population control through some system of obligatory marking of everyone, and after that a world war arising from an invasion by the nations of the East (presumably China and its allied powers) resulting in the death of one third of the world’s population.

The news today is filled with stories of Iran continuing to threaten the West with its attempts to construct nuclear missiles, while China has become openly aggressive and threatening, reasoning it has ‘a mandate from heaven to rule the world’, and odd justification coming from an atheist communist regime.

Nevertheless, the United Nations concerns itself with the promotion through ‘education’ of sexual dissolution and abortion, and seeks the normalisation of homosexuality and promiscuity.  The United Nations continues to promote dictatorships with terrible human rights records to positions of power and authority, condemning countries with good human rights records and giving free passes to those nations who torture, persecute and murder as it suits them.

What are Christians to do, if they are not to be caught up in the judgment of a collapsing civilisation with its inevitable violence, disease and starvation that has accompanied such disasters throughout human history?

In principle there are three choices.  First, jettison Biblical doctrine and join the party.  Too many church denominations seem to be going down this road.  That road to hell is paved with compromise and guarantees the church’s irrelevance.

Second, try to stem the tied and turn this civilisation back to its Christian roots.  Reverse the corruption of every major institution: government, education, health, commerce, and media back to a God honouring, Bible believing Christ-inspired ethos and morality.  It is too late for that.  The Socialist Fabian strategy to drive God out of the civilisation has worked – and we should now let them have what they wanted: a society without God.  Let them experience it in all its terror for, in the end, it will be violence, disease, starvation, darkness, fire and death.

The only option left is to do what God has commanded: ‘Come out of her, my people.’  The time has come to create a new civilisation that is distinct and separate, with its own place, justice system, economy, education, healthcare, and above all faith, resolute in following God’s ways and truth-telling in warning of the consequences of sinking back into the immorality of the current culture.

Will the Church be attacked – of course it will, and therefore it must be physically and organisationally constructed to be extremely resilient and enduring – an underground resilient Church – and not afraid to justly defend itself from violence, kidnap, rape and murder.  It cannot live free of trouble and attacks, but it can at least endure without drowning in the sea of corruption and dissipation.  Instead, it will be a real alternative, a city on a hill, something to aspire to, a taste of heaven on earth, embattled but not defeated, overpowered but not destroyed, living not dying.  It is time for the Church to show that it is the true United Kingdom – the Kingdom of God – keeping the commands of God and the faith of Jesus. It is time! The Lord bless you all.