I have overcome the world 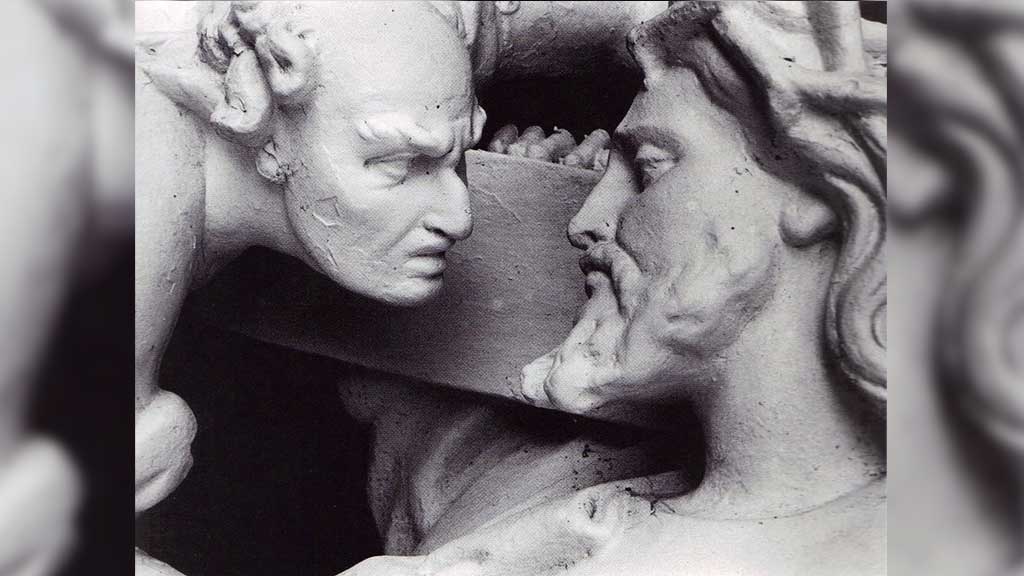 “Now the serpent was more crafty than any other wild animal that the Lord God had made. He said to the woman, ‘Did God say, “You shall not eat from any tree in the garden”?’  The woman said to the serpent, ‘We may eat of the fruit of the trees in the garden; but God said, “You shall not eat of the fruit of the tree that is in the middle of the garden, nor shall you touch it, or you shall die.”’  But the serpent said to the woman, ‘You will not die; for God knows that when you eat of it your eyes will be opened, and you will be like God, knowing good and evil.’  So, when the woman saw that the tree was good for food, and that it was a delight to the eyes, and that the tree was to be desired to make one wise, she took of its fruit and ate; and she also gave some to her husband, who was with her, and he ate.  Then the eyes of both were opened, and they knew that they were naked.” [Genesis 3:1-7]

If human beings had never gained knowledge beyond the ability to recognise things and processes, if we had never mastered fire, the knapping of flints, the weaving of cloth, the making of bows, the making of pottery and the mastery of agriculture, we might have lived peaceful lives on the earth, avoiding the violent conflict that has been part of our rise to dominate this planet.

The bonobo apes live peaceful lives in the trees of the Congo.  Although highly intelligent, they do not have linguistic ability beyond peeps and calls, not so different from a human infant.

The moment when all this changed for homo sapiens was when we found we could use power and knowledge to gain more power and knowledge.   That moment seems to have been when mankind discovered the ability to win metals.  Now a blade could be made any size – power was increasing with every innovation.  And within a geological blink of an eye homo sapiens now has the power to destroy every living thing on the planet with its nuclear weapons.  Homo sapiens has become creatura mortiferum – Deadly Creature.

God said to Adam: “of the tree of the knowledge of good and evil you shall not eat, for in the day that you eat of it you shall surely die.” [Genesis 2:17].

When God came to earth to redeem mankind, He did not come in chariots of fire with a mighty army to crush his enemies beneath His feet by one fell blow.  Instead, he died the death of a criminal, rejected, overpowered by the political powers of his day and executed by crucifixion.  Only the kindness of friends prevented his dead body being thrown on the city dump.

So, how can Jesus say, concerning his coming death, “In the world you will have tribulation. But take heart; I have overcome the world”? [John 16:33]

In the first place, this was a moral victory.  Jesus exposed the wicked sinfulness of those who were supposed to be the best of men, and at the same time revealed himself, God incarnate, to be the most loving of souls.  Although He possessed great power, He did not use it to save Himself.  Instead, He used none of it for Himself.  His enemies, however, were killing Him in order to protect their power, at the cost of lying, corrupting the legal process, doing everything to have Him killed while making it appear they were doing the right thing.

In the second place, God raised him from the dead.  The principle in the Old Testament was that ‘the soul that sins shall die.’ [Ezekiel 18:20].  But since Jesus was sinless, His dying was contrary to God’s principle.  Therefore God, who is perfectly righteous, raised Him back from the dead by His Spirit, never to die again.

Therefore, it is solely due to the holy character of God, this holiness being displayed in the Father, the Son and the Holy Spirit that Jesus was rightly raised from the dead.  And it is solely by the power of God that He was raised, never to die again.  God did not raise Him from the dead as a selfish act but as a deed of principle.

It is through the apparent powerlessness of His death on the Cross that Jesus exposed the inherent wickedness of those who give up every moral impediment in order to keep their power.

In the last 2,000 years, through the preaching of the Gospel, God has given mankind the chance to gaze up the Cross, contemplate its many layered meaning and repent and follow the way of Christ – to take up the cross and follow Him.  Few, it seems, take up that opportunity.

The culture war in the USA has seen the church there trying to maintain a Christianised culture through politics.  It has now reached a nadir.  This strategy has been a dismal failure.  The goal of the church is Christ-like individuals, not to make so-called Christian nations.  Every ‘Christian’ nation has behaved at times in a most un-Christlike manner.  Just as mammon cannot be worshipped at the same time as God, nor can power be grasped for what is a selfish national interest of a ‘Christian’ nation and the nation’s behaviour conform to the ideal of Christ.  The two cannot mix.

It only in the willing restraint of power that the true character of Christ is revealed – and only that can truly touch the hard heart of man and soften it.  The result is, of course, that the enemy of Christ will try to have you tortured, raped, killed; he will take your children to turn them into rabid enemies of the Cross.  He seeks to destroy every last vestige of Judaeo-Christian heritage and doctrine on the Earth.  But he is defeated not by bombs, planes and guns, but by the moral power of the righteous victim and the message he lives out.

This is the only way Jesus has given to us to prove our discipleship.  We all wish there was another way, just as Jesus did in the Garden of Gethsemane when He prayed, “If it is possible, let this cup pass from me” [Matthew 26:39].

In these last days, the Church must pass through this fire to be whitened and ready for her bridegroom when He appears. The bless you and keep you,