How and Why Muslims Delude Themselves about Islam 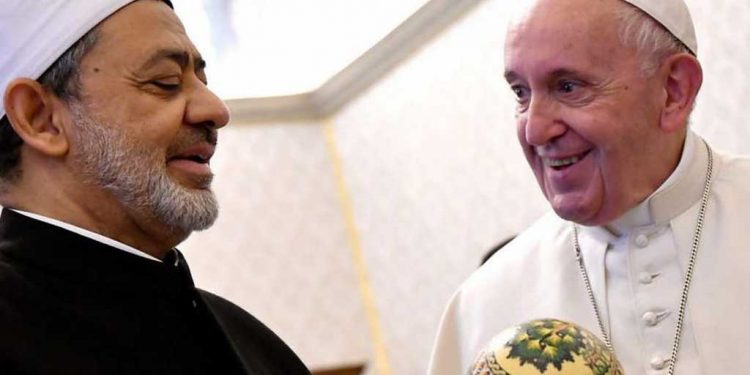 Egypt’s leading Muslim cleric and sheikh, Dr. Ahmed al-Tayeb—also known as Pope Francis’s “wolf in sheep’s clothing”—recently asserted a demonstrable falsehood.  On April 30, 2020, during his televised program that appears every year around Ramadan and is watched by millions in Egypt and the Arab world, the Grand Imam of the Islamic world’s most prestigious university, Al Azhar, declared that “Islam doesn’t seek war or bloodshed, and Muslims only fight back to defend themselves.”

This, of course, is a reaffirmation of the grand conclusion reached at—and therefore making a mockery of—a recent mega conference dedicated to finding solutions to “extremism.”  Hosted in Egypt by Al Azhar, and attended by leading representatives from 46 Muslim nations, al-Tayeb capped off the two day conference by declaring that:

Jihad in Islam is not synonymous with fighting; rather, the fighting practiced by Prophet Muhammad and his companions is one of its types; and it is to ward off the aggression of the aggressors against Muslims, as opposed to killing those who offend in [matters of] religion, as the extremists claim.  The established sharia rule in Islam bans antagonism for those who oppose the religion.  Fighting them is forbidden—as long as they do not fight Muslims.

Needless to say, such claims fly in the face of more than a millennium of both well documented Islamic teachings and Islamic history.  Beginning with Muhammad—whose later wars were hardly defensive but rather raids meant to empower and aggrandize himself and his followers over non-Muslims—and under the first “righteous” caliphs and virtually all subsequent sultans and rulers, jihad consisted of raiding, slaughtering, enslaving, and ideally conquering non-Muslims who refused the invitation to embrace Islam.  One need only look at  a map of the Muslim world today and realize that the vast majority of it—all of the Middle East, North Africa, Turkey, Central Asia, as far east as Pakistan and further—was taken by violent conquest in the name of jihad.

However, rather than dismiss al-Tayeb as just another liar, trying to save face, it’s worth noting that something else is going on at a deeper level when Muslims insist to one another—in both instances, al-Tayeb was not addressing Westerners but fellow Muslims—that jihad is defensive.

The fact is, the overwhelming majority of Muslims, even of the terrorist variety, are, like most people, committed to seeing themselves and their religion as the “good guys.”  As such, there is an implicit agreement between them always to present their religion as according with innate concepts of justice.  This has caused them to go to extreme lengths, as the current case suggests.

For example, the historic Islamic conquests are never referred to as “conquests” in Arabic and other Muslim languages; rather, they are futuhat—literally, “openings” for the light of Islam to enter (or fatah in the singular, as the Palestinian group tellingly calls itself).  In this context, every land ever invaded or seized by Muslims was done “altruistically” to bring Islam to wayward infidels, who are seen as the aggressors for unjustly resisting Islam.

Thus, according to an article titled “The Wisdom of Jihad,” published by Islam Question and Answer, jihad does not “only and simply mean to kill non-Muslims”; rather, “The kuffaar [non-Muslims, or infidels] whom we fight will themselves benefit from jihad. We strive against them and fight them so that they will enter the religion of Allah which is acceptable to Him, which will lead to their salvation in this world and in the Hereafter.”

From here one understands why even sadistic mass murderers and pedophiles such as Ottoman Sultan Muhammad (or “Mehmet”) II is known in Islamic historiography as “Muhammad the Opener”—for it was he who brought Islam’s light to the reluctant denizens of Constantinople in 1453.

Mocking such Muslim logic, Dr. Ahmed ‘Abdu Maher, an Egyptian researcher and political activist, once made a video where he asked a hypothetical.  What if Donald Trump—instead of banning immigration from a few terrorist nations (mostly Muslim) and being denounced as a “racist” for it—followed Islam’s “altruistic” outlook and offered American Muslims three choices: either convert to Christianity, pay jizya and live as second class citizens, or die?

Would he be a racist or not? Would he be a terrorist or not? How then [when one considers] that we have in our Islamic jurisprudence, which you teach us, and tell us that all the imams have agreed that the Islamic openings [i.e., conquests] are the way to disseminate Islam? This word “openings” [ futuhat] — we must be sensitive to it! The Islamic openings mean swords and killing.

The Islamic openings, through which homes, fortresses, and territories were devastated, … [are part of] an Islam which you try to make us follow. So I wonder O sheikh, O leader of this or that Islamic center in New York, would you like to see this done to your wife and daughter?…  That your daughter goes to this fighter [as a slave], your son to this fighter, a fifth [of booty] goes to the caliph, and so forth? I mean, isn’t this what you refer to as the Sharia of Allah?

Maher—this nominal Muslim who has embraced the ugly realities of Islam’s historic conquests—is, however and unfortunately, a rare commodity in the Muslim world.  As one American historian of Islam writes:

[T]he conquests were seen from the beginning as one of the incontrovertible proofs of Islam. To disavow them or to examine them critically—which has yet to happen in the Muslim world—will be very painful for Muslims especially Arabic-speaking Muslims. At every point… when Muslims have tried to abandon militant jihad for the internal, spiritual jihad… the memory of the conquests and the need to rationalize them have defeated this effort. The problem may lie in the unwillingness to confront the fact that the conquests were basically unjustified. They were not a “liberation” and they were not desired by the non-Muslim peoples; they were endured and finally accepted [Understanding Jihad, p.167]

Islam’s leaders such as Grand Imam al-Tayeb—one can add the Western mainstream as well—are committed to deluding Muslims about Islam’s past (and therefore present).  And little wonder; the “average” Muslim who learns about the ugly reality of Islam’s past often apostatizes in his heart—lapses—remaining Muslim only in name.

In other words, the problem is not just that many in the West are being deceived about Islam and its past; hundreds of millions of “regular” Muslims are also being deceived—and for the very same reason.