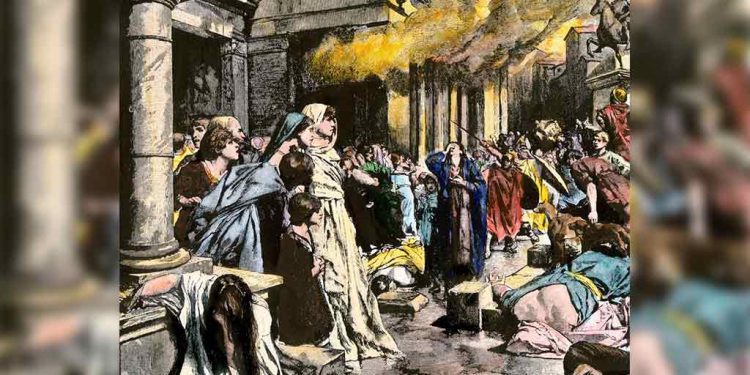 As I have written before, the United States of America and other Western nations are behaving more and more like the description of the prophetic Babylon the Great in the Book of Revelation, chapters 17 and 18.

The recent surrender of Afghanistan to the Taliban has yet again revealed the real policies of the USA and allies, policies that go back certainly nearly one hundred years to the Fall of Smyrna in 1922 when Turkish Muslims slaughtered many thousands of Christians in the sight of Western powers whose naval ships were on a visit to the port.  The crews were under strict orders to do nothing as the sea around their vessels was filled with the Christian dead and dying.

Once again, the political powers of the West, a civilisation which would not even exist were it not for its two thousand years of Christian heritage and influence, has revealed the full depth of its Christ-hatred by manoeuvring to ensure as few Christians as possible are rescued from the blades, bullets and burnings of the Taliban who are determined to extinguish the lives of every Christian in the country of Afghanistan

U.S. and Western leadership avoid any policy of support for Christian minorities — since any such policy would run counter to Western appeasement toward “Islamic sensibilities”.  The West is more dedicated to permitting the persecution of Christians by what can now only be understood as Islamist proxies than even some Muslim governments.

The Biden administration is preventing the rescue of persecuted Christian minorities from the Islamic Emirate of Afghanistan, where they face certain and likely gruesome death.

This information surfaced on August 26, during an interview between Glenn Beck and Tucker Carlson on Fox News. Through his charity, the Nazarene Fund, Beck had chartered planes to airlift 5,100 Christians out of Afghanistan and into neighbouring nations. Before long, however, U.S. officials intervened and prevented the escape of a group of 500 Christians, mostly women and children, who were ordered outside of Kabul airport’s protected area.

“I have pictures of them pleading to get back through the gate.  And then I have pictures of blood and body parts and nothing but death in that same area [of the airport]. We believe that our State Department is directly responsible… I don’t know how many [of the 500 Christians] survived… “

“In fact, an ambassador was called in Macedonia last night and told not to accept any of these people, as we were trying to get them off the tarmac here, to keep the airport flowing, and getting these Christians out. We haven’t really been able to move anybody for about 12 hours.”

“Our mission is now changing greatly. We have to send people into even greater danger to try to smuggle these Christians out, who are marked not just for death, but to be set on fire alive because they’re converted Christians.”

Worst of all, not only has the U.S. exacerbated and then totally ignored the plight of Christians in Afghanistan, it is now going out of its way to prevent others, as noted by Beck, from helping to evacuate Christians to other nations willing to accept them.

At one point in his interview with Carlson, Beck mentioned two nations that were being cooperative in helping to rescue Christians — although he was anxious to add, “I don’t even want to say who they are, because I’m afraid our State Department will call them and threaten them!”

“I don’t know why we have open borders and closed airports,” Beck concluded his interview. While it is easy for all sorts of illegals to cross over the porous US/Mexico border, “one group of people” — he said of persecuted Christians — is not even allowed to enter airports, and are abandoned to be “raped, exploited and crucified or set on fire by terrorists,” said Beck, before adding, “There seems to be a pattern with the Biden administration.”

According to one recent report, “Taliban militants are even pulling people off public transport and killing them on the spot if they’re Christians.”

Similarly, any Afghan caught with a Bible app on their phone is executed. “How we survive daily only God knows,” a Christian Afghani said earlier this year on condition of anonymity. “But we are tired of all the death around us.”

Even before the Western surrender the situation for Christians in Afghanistan was unbelievably tough.    Although nearly 80 percent of all persecution Christians experience around the globe is committed in the Islamic world, Afghanistan is the worst of all Muslim nations.

“It is impossible to live openly as a Christian in Afghanistan. Leaving Islam is considered shameful, and Christian converts face dire consequences if their new faith is discovered. Either they have to flee the country, or they will be killed. There is no safe way to express any form of Christian faith in the country.”

The pattern of the West throwing Christians under the Islamic bus has gone on for a long time, certainly a century. Under the Obama presidency, the White House and State Department engaged in all sorts of discriminatory measures against Christians, particularly during the refugee crisis that occurred under the rise of ISIS during Obama’s watch.

The Obama administration’s discrimination against Christians was so obvious, in fact, that in late 2016, a federal appellate court filed a lawsuit against the Department of Homeland Security, in which Judge Daniel expressed his “concern about the apparent lack of Syrian Christians as a part of immigrants from that country.”

“Perhaps 10 percent of the population of Syria is Christian, and yet less than one-half of one percent of Syrian refugees admitted to the United States this year are Christian…. To date, there has not been a good explanation for this perplexing discrepancy.”

The numbers were even more perplexing when examined in full context. Although the U.S. government had acknowledged that ISIS was committing genocide against Christians in Syria due solely to their religious identity, it brought into the United States only those who by definition were not in any way being targeted by ISIS — Sunni Muslims, of whom ISIS, a Sunni organization, identifies with and does not attack. Despite these two all-important facts — and despite the fact that Sunnis were about 75% of Syria’s population, and Christians about 10% — 99% of those brought to America were Sunni Muslims and under 0.5% were Christian. As CNS news noted in 2016, “Record 499 Syrian Refugees Admitted to US So Far in May Includes No Christians.” In other words, even if one were to operate under the assumption that refugee status should have been made available to all Syrians, regardless of religion, there should have been 20 times more Christians and about one-quarter fewer Sunnis granted refugee status under Obama.

This leads to another pattern established by Obama and evidently continued by Biden: while preventing true victims of Islamic terror from escape or entry into the US, the Biden administration is possibly granting refugee status to countless, inadequately vetted male Muslims from Afghanistan — not a few of whom may share in the same worldview as ISIS and the Taliban.

The UK is no better, with a long pattern of preventing Christians immigrating into the UK while allowing hundreds of thousands of Muslims in.  Reports have been written but very little has been done to change the pattern.  The UK government still lives within the long shadow of its betrayal of the Christians of Smyrna in 1922.

To a Christian with any knowledge of Biblical prophecy, it is of little surprise that the West is in a process of disintegration. Having abandoned Biblical Christianity and respect for Christianity’s Jewish origins, the culture of the West is as empty as an all-night party that has run out of food and alcohol.

As a result, our politicians lack the ideological acumen to keep their countries going in a competitive way.

The only trick the West has got is to keep running up its debt to try to keep the party going, conning the world that it is still a force to be reckoned with.  Sure, it has the means to use force, but it has profoundly lost any knowledge for what is worth fighting for. For that reason alone, the guilt of allowing the Christians to be slaughtered at the hands of the Islamists, whose knowledge of the lack of evidence for the veracity of their own religion is so profound they really do think, laughably so, that Allah really is God, lies not so much with the Islamists who ‘do not know what they do’, but lies with the Western polities, who absolutely have no such excuse.

And for this reason, the lives, or blood, ‘of the holy ones are found in her’ [Revelation 18:24], the West, Babylon the Great.

Scripture is very clear on two issues concerning Babylon the Great.  First, it will collapse, utterly.  The party will end with fire and collapse.  Second, prior to this, indeed as soon as it is clear who Babylon the Great is, God’s people are commanded to ‘come out of her’.

While we can debate whether that involves emigration or secession or both, the time has come to prepare to ‘come out of her’.  If we don’t, then we share in her guilt and will be consumed by her plagues. The Lord bless you.

My sincerely thanks and acknowledgements to Raymond Ibrahim, whose fearless reportage of Christian persecution is a gift to the Church.