We grieve with the Christians of Surabaya, Indonesia 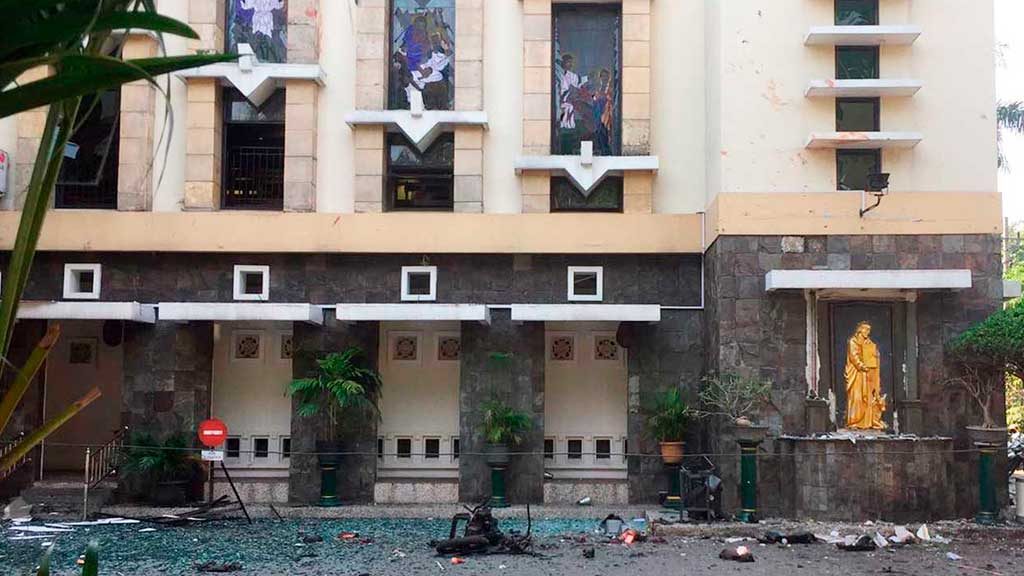 Six suicide bombers from one family – including children and teens – rode in on motorcycles and attacked three churches in Surabaya, Indonesia during Sunday Mass, killing at least 11 people and wounding over 40 more, according to local police reports.

Indonesia’s national police chief Tito Karnavian said: ‘The father, two sons ages 18 and 16, and the mother with two children ages 12 and 9 all took part in the deadly church bombings.’

The first attack that killed four people, including one or more bombers, occurred at the Santa Maria Roman Catholic Church, followed by a second explosion at the Christian Church of Diponegoro that killed two people and finally there was a third attack at Pantekosta Church, where two more died.

The father of the family accused of carrying out the suicide bombing had detonated a car bomb during his attack on the Sanata Maria Church. A witness described the woman with two children, saying she was carrying two bags at the Diponegoro church, which exploded. A street merchant saw two men riding on a motorbike, which the Police Chief said the two teenage boys had used in their bomb attack.

Only last night JCM decided we would, somewhat controversially perhaps, republish video interviews of a former Hamas Youth Leader, who having decided to follow Christ, claims in the interview that if you analyse the Quran honestly, one is forced to conclude that the values of ‘Allah’ are those of a terrorist.

We did not republish this to cause offence – for causing offence is not our aim. Indeed, it is against the teaching of the Apostle Paul to set out do to so. We republished these interviews in order to encourage people to think for thermselves about what it is they believe, and why.

In the Quran in Surah 9 verse 5, it says in an authorised English translation:

‘And when the sacred months have passed, then kill the polytheists wherever you find them and capture them and besiege them and sit in wait for them at every place of ambush. But if they should repent, establish prayer, and give zakah, let them [go] on their way. Indeed, Allah is Forgiving and Merciful.’

Now let’s just think about this for a moment. ‘Polytheists’ seems to be a word for those who believe that God is one person in three persons: God the Father, God the Son and God the Holy Spirit.  This is the doctrine (a word that means ‘teaching’) of the Trinity. God the Father is the Creator. God the Son is God revealing himself to mankind in human form – as St Paul wrote: ‘The visible image of the invisible God’, i.e. Jesus, and God the Holy Spirit is the invisible presence of God in the Universe who indwells His people, coming alongside them and helping them, giving gifts of wisdom, knowledge, faith, healing, prophecy and so forth.

And Allah’s command to his followers, to those who submit to him, is to kill them, capture them, besiege them, ambush them until those who remain capitulate and act like Muslims. Only in that circumstance does Allah say let them go. This is his definition of being forgiving and merciful: if you become Muslims we will hold off slaughtering you.

Given that these are the words of Allah, one has to ask what kind of job description best fits him.

As if on cue, the day after we decided to republish the video, we read with shock of this Muslim family destroying itself in order to kill Christians who were at prayer worshipping God in their church buildings. What possible reasons might they have for undertaking this cruel and inhuman act of mass murder?

Or was it because they had decided that the best thing they could do with their lives that day was to kill other people who were not convinced that Allah was a good god and therefore no god at all, precisely because he commanded people to murder their neighbours, and to kill themselves in the attempt.

One is forced to conclude, on the basis of a simple and straightforward examination of the facts, that the whole concept of Allah and his supposed commands is nothing more than a human invention which does not pass the morality test. Is it good or is it bad?

If we are to be sure that murdering our neighbours is indeed a bad thing, we need a sure and certain principle that we can use to judge the actions encouraged by any idea, ideology or religion.  This test was first clearly stated by Jesus Christ:

‘Do to others as you would have them do to you.’

If your beliefs are in a god or ideology that does not have this principle at its heart then I would encourage you to explore and find one that does. Think for yourselves! Do not just follow the herd.  Your destiny depends up on it.