The Family that . . . . together stays together 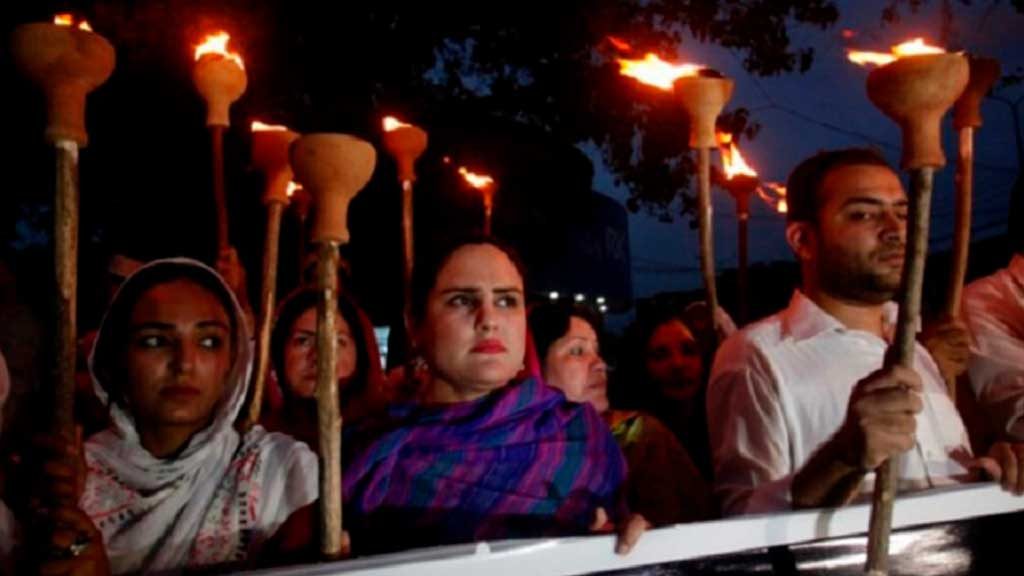 There is a saying among Christians: ‘the family that prays together stays together.’

Well, that is not the practice in every family, as this news item indicates:

’17-year-old Christian girl was murdered in Pakistan after being tied down and strangled to death by a Muslim family before her father’s own eyes, reportedly because she didn’t do the household chores to their satisfaction.

Christians in Pakistan reported on Tuesday that the murder of Kainat Salamat, daughter of Salamat Masih, occurred last week in Kamonki, Gujranwala district.

Masih filed a First Information Report to report the crime on May 6, explaining to police that he arrived to visit his daughter at the home of Muhammad Asif, where she had worked as a domestic helper since age 11.

The father says that he and another relative saw that the Muslim family, Asif, Muhammad Kashif, Muhammad Tariq Pasran, Muhammad Ismael, along with Asif’s wife and another woman, were holding down Kainat’s legs and arms.

The Muslim family had tied a rope around the Christian girl’s neck and were strangling her. Despite her father’s pleas, they killed her in front of his eyes.

The father adds in the report that his daughter, who was buried on Monday, was killed for failing to do the house cleaning properly.

The British Pakistani Christian Association also reported on the girl’s death, revealing that her corpse was take to Civil Hospital Gujranwala for a post-mortem study. There, doctors found evidence that the teenager had suffered rape…’

This being the Islamic Republic of Pakistan, we can confidently predict, on the basis of thousands of previous crimes against Christians, that no one will pay a penalty for the crimes of rape and murder. After all, 17 year old Kainat was merely a Christian, which makes her subhuman and fit only to be raped and murdered.  Surely this is a perfectly reasonable act to inflict upon on a young woman with her life ahead of her, who dreamed of being married one day, having children, having a loving husband, a little house somewhere?

Because she believed in Jesus, she must be killed – no – she must be raped and killed.  But just to prove that this was entirely justified, allegedly her employers and some of their friends first found  a little dust in the corner of the room, perhaps.

Let’s imagine a dialogue as the events unfolded, as reported.

‘Bit of dirt left behind? You’re guilty! Right! You’re having it! Mum – you hold one leg. Daughter you hold the other. Skirt off!   Lads, you loop that rope and keep it tight – I don’t want her screaming too loudly, it might put me off. Right, now – in we thrust. Keep pulling tighter, tighter! Allahu Akhbar!’ No?  Then what was said as this poor young cleaner was being raped and strangled?

I would like to say a few things to Mr Asif, if the report be true:

“Was that how it was, Mr Muhammed Asif? Oh the delights you shall receive in paradise! Oh how pleased Allah must be with you all!

“But Mr Asif, do you not know? Have you not heard? Judgment before Almighty God will be this:  ‘the measure with which you measure will be the measure that is measured back to you’. Now think about that for a moment. What little Kainat experienced in the final few minutes of her short life, you and your family will experience at the hand of God the Judge Does that make you frightened?  It should. It is a fearsome thing to fall into the hands of the living God.”

“Do not think for a moment that because you are religious your religion can save you. You have but one hope, and that hope is in Jesus Christ – he is the only means given by God for the forgiveness of sins. Get on your knees and plead with him to forgive you. He died on the cross as the hands of cruel men so that the punishment you (and I) deserve he took upon himself. He did so because God loves you and does not want you to have an eternity in Hell, but to share an eternity in Heaven with him.

That heaven is only possible because all who enter have learned to ‘do to others as they would have others do to them.’ Forget about all those ‘dark eyed houris’: there is no sex in heaven, because there is no death in heaven. Mr Asif, this is your chance to not totally fail at being a human being – this is the narrow way that leads away from the wide road that descends into destruction and leads instead to life, and life everlasting.”

“But there are two conditions – put you faith in Jesus Christ – the only One who can save you.  And forgive those others who have sinned against you.”

“Mr. Asif, I do not care that you are an enemy of Christians, I do care for the eternal destiny of your soul. The question is, do you?”

I wish I could say these things to Mr Asif and to his family after he were found guilty at his trial. I doubt my words will ever reach him. A pity. I doubt he will have a trial. Also a pity.

But my heart breaks for Salamat Masih and what remains of his family.

Holy God, receive the spirit of his beautiful daughter Kainat.