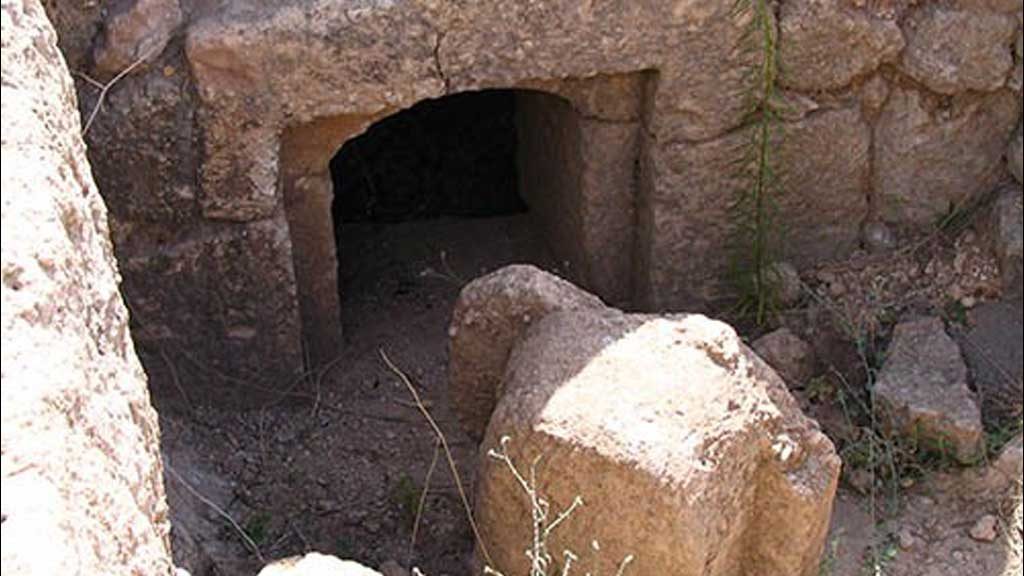 ‘The next day, the one after Preparation Day, the chief priests and the Pharisees went to Pilate.

‘Sir,’ they said, ‘we remember that while he was still alive that deceiver said, “After three days I will rise again.”  So give the order for the tomb to be made secure until the third day. Otherwise, his disciples may come and steal the body and tell the people that he has been raised from the dead. This last deception will be worse than the first.’

‘Take a guard,’ Pilate answered. ‘Go, make the tomb as secure as you know how.’  So they went and made the tomb secure by putting a seal on the stone and posting the guard.’ [Matthew 27:62-66]

The sealing of the tomb was done in several steps. First, a strong rope was placed around the stone at the door of the tomb. Secondly, the two ends were drawn to the side of the door on the outer wall of the tomb. Thirdly, a wax or clay seal was placed on the rope where it crossed itself in front of the stone and where the rope touched the two sides of the tomb. It would be impossible to move the stone without breaking the seal. To break the Roman seal was punishable by death.

This occurred after Friday sundown. Jesus was laid in the tomb shortly before sundown (the beginning of the next day in the Hebrew calendar) and, as soon as possible; the Roman guard was placed to make sure that the body would not be stolen out of the tomb.[1]

Of the more than 900 Second Temple-period burial caves around Jerusalem examined by archaeologist Amos Kloner, only four have been discovered with disk-shaped blocking stones. These four elegant Jerusalem tombs all belonged to the wealthiest—even royal—families, such as the tomb of Queen Helena of Adiabene.

Was the tomb of Jesus among the “top four” Jerusalem tombs from the Second Temple period?

The Gospel of John presents a slightly different picture than the other three Gospel accounts—with a different Greek verb used to describe the stone closing Jesus’ tomb. John 20:1 reads, “Early on the first day of the week, while it was still dark, Mary Magdalene came to the tomb and saw that the stone had been removed from the tomb.”

The other Gospels use the world ‘roll’.  Once you see the size of a ‘stopper’ stone, it is easy to see that, however one gets the stone out of the doorway, to move it out of the way it would be rolled.

However, the traditional image of the disk shaped stone at the entrance to the tomb belonging to Joseph of Arimathea seems to be a later Christian assumption, as in Byzantine times 1 m diameter disk shaped blocking stones had become common, almost certainly out of respect for the universal but simplistic Christian misunderstanding of the word ‘roll’ used in the synoptic Gospels.

Touching a dead body, especially after burial, made you ritually unclean for seven days, during which time it was required that a Jew regularly bathe.  Given the heat, it was and remains the custom to bury the person on the day they die, and leave them in their grave for years until all that remains is the bones.

Since it was Passover, the moon was full and the white stone of the Judean hills were covered in the tents of those who had travelled to the Feast.  It was also the Sabbath when no work could be done – that included carrying a burden.

There was no way a group of men could successfully skulk around carrying a dead body, especially not near Jerusalem at this time, day or night.

While the Jewish leaders expressed concerned that the disciples might engage in a desparate plan, they had no evidence to make this action likely.  It is much more likely, given the miracles that Jesus had performed, including raising the dead on at least three occasions, that deep down what they really feared was Jesus returning from the grave.

People go to great length is keep Jesus away.  They refuse to consider Him and His claims.  They invent or adopt theories or competing religions.

In France last year, over 1,000 Christian churches were vandalised or set on fire, it is similar in Germany.  France is now trying to extinguish the light of Christianity.  But that light does not principally shine from buildings, it shines from people.  Europe can destroy all of its Churches and make any expression of Christianity illegal as it is on the way to doing, but it will not change one iota the presence of Christ among His people here in Europe.

Europe may then try to starve and murder every Christian in the continent, but even if they do, that light will just shine even brighter.  That light cannot be extinguished.

Imagine a computer game called ‘Last Act’.  It is a simulation game and it concerns a country with a teeming population in crisis, and you the player are a citizen in this country.  In this country two religions have been established.

The other religion called ‘Enslavement’ and the primary duty of that religion is to murder.  In order to prove your loyalty to the ‘Slave master’ god, you have to murder someone, preferably of the other religion; the more the merrier.  All who do so are commended and promised untold pleasures.   If you refuse to murder however, or even worse, if you want to no longer be a ‘slave’ you would be murdered, naturally.  The leader of that religion is called ‘Praiseworthy’.

These two religions live next door to one another.  How does it play out?  Who wins?

At the end of the age, Scriptural prophecy foretells that all the armies of the world will gather together to fight against the Lord at His return, led by the Beast (in the Book of Revelation), a symbol of what appears to be Islam.

If you want to know what happens next, read Zechariah 14 and Revelation 19.

Yet all the while, Jesus invites men and women, boys and girls, saying ‘Come unto me all who are weary and burdened, and I will give you rest.’ [Matthew 11:28]

God bless you all.