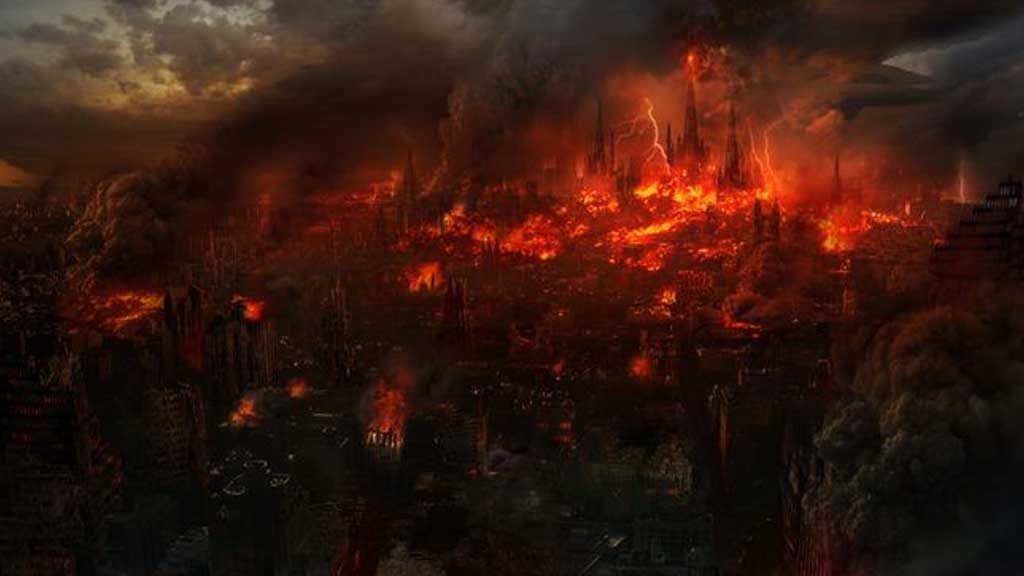 The next day the disciples have conversations with Jesus about the glories of the temple, and Jesus predicts that the temple will be destroyed, not one stoning standing on another.  Not realising that Jesus is predicting the Roman destruction of the temple that happened in 70 AD some forty years into the future, they assume that Jesus is really talking about the end of the world.  Matthew records one conversation, Luke another.  The Luke one is highly relevant in our day because in that prophecy Jesus foretells climate change as a sign announcing that He will return soon, but in this article I want to focus on what Matthew records.

‘Jesus left the temple and was walking away when his disciples came up to him to call his attention to its buildings.  “Do you see all these things?” he asked. “Truly I tell you, not one stone here will be left on another; everyone will be thrown down.”

As Jesus was sitting on the Mount of Olives, the disciples came to him privately. “Tell us,” they said, “when will this happen, and what will be the sign of your coming and of the end of the age?”

Jesus answered: “Watch out that no one deceives you.  For many will come in my name, claiming, ‘I am the Messiah,’ and will deceive many.  You will hear of wars and rumours of wars, but see to it that you are not alarmed. Such things must happen, but the end is still to come.  Nation will rise against nation, and kingdom against kingdom. There will be famines and earthquakes in various places.  All these are the beginning of birth pains.

“Then you will be handed over to be persecuted and put to death, and you will be hated by all nations because of me.  At that time many will turn away from the faith and will betray and hate each other, and many false prophets will appear and deceive many people.  Because of the increase of wickedness, the love of most will grow cold, but the one who stands firm to the end will be saved.  And this gospel of the kingdom will be preached in the whole world as a testimony to all nations, and then the end will come.

“So when you see standing in the holy place ‘the abomination that causes desolation,’ spoken of through the prophet Daniel—let the reader understand— then let those who are in Judea flee to the mountains.  Let no one on the housetop go down to take anything out of the house.  Let no one in the field go back to get their cloak.  How dreadful it will be in those days for pregnant women and nursing mothers!  Pray that your flight will not take place in winter or on the Sabbath.  For then there will be great distress, unequalled from the beginning of the world until now—and never to be equalled again.

“If those days had not been cut short, no one would survive, but for the sake of the elect those days will be shortened.  At that time if anyone says to you, ‘Look, here is the Messiah!’ or, ‘There he is!’ do not believe it.  For false messiahs and false prophets will appear and perform great signs and wonders to deceive, if possible, even the elect.  See, I have told you ahead of time.

“So if anyone tells you, ‘There he is, out in the wilderness,’ do not go out; or, ‘Here he is, in the inner rooms,’ do not believe it.  For as lightning that comes from the east is visible even in the west, so will be the coming of the Son of Man.  Wherever there is a carcass, there the vultures will gather.

“Immediately after the distress of those days, the sun will be darkened, and the moon will not give its light; the stars will fall from the sky, and the heavenly bodies will be shaken.’

“Then will appear the sign of the Son of Man in heaven. And then all the peoples of the earth will mourn when they see the Son of Man coming on the clouds of heaven, with power and great glory.  And he will send his angels with a loud trumpet call, and they will gather his elect from the four winds, from one end of the heavens to the other.’ [Matthew 24:1-31]

To modern ears, this passage resonates strongly with modern understandings.

The sea-change that has occurred in the West against Christianity, where the tenets of Biblical teaching are now not only rejected but have been criminalised, in the sense that people loose their jobs or are fined or imprisoned just for thinking them, seems to be the opening salvo in a rapidly intensifying one-sided war on Christian believers, in which they ‘will be handed over to be persecuted and put to death’, as already happens in the Islamic, Communist and Hindu regions.

We know enough nuclear science now to recognise how unbelievably toxic radiation and fallout is to preterm babies and those in their first three months of life, who are 1,000 times more sensitive to radiation and ingested radionucleotides than adults.  ‘How dreadful it will be in those days for pregnant women and nursing mothers!’  And a nuclear winter would indeed be ‘the sun will be darkened, and the moon will not give its light’.

But if Jesus did not intervene, life on earth would be utterly extinguished, so He intervenes: ‘the stars will fall from the sky, and the heavenly bodies will be shaken’, for ‘If those days had not been cut short, no one would survive’.

There is a causal link that ties the being ‘hated by all nations because of me’ and the near-death experience of the World – the irony being that it is the One we choose to hate who saves the planet from total annihilation.

St. Peter in his second letter asks, in the light of this predicted future, what kind of people should we be?  This is a very profound question, and an answer that does it justice cannot be a glib one.  But part of the answer must include being ‘one who stands firm to the end.’

Tomorrow, we will read how Jesus answers that question more fully in His final teaching to His disciples. God bless you.