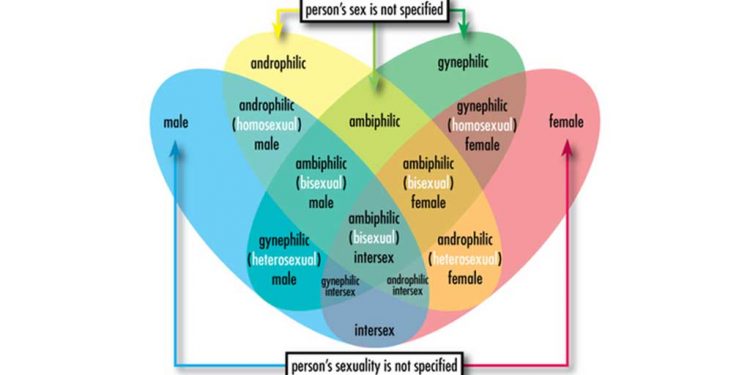 The intense campaign to ‘smash heteronormativity’ in western societies and replace it with a confused mishmash of sexual desires for anything with a pulse has a simple goal: to make everyone capable of breeding to completely fail at the one thing sustaining the human race humanity necessitates of them: ‘to go forth an multiply’ [Genesis 1:22] as well to fail at the one thing God asks of Christian fathers: ‘You fathers, provoke not your children to wrath: but bring them up in the nurture and admonition of the Lord.’ [Ephesian 6:4].

Instead, the evangelists for their new sexual mores want to ‘free’ society from such ancient wisdom.  Actually, their sexual mores are very old mores that, wherever they has been tried, have always and with absolute success destroyed those societies in which they has become established.

Like ancient Israel, the Western post-Christian nations have ‘deserted the Rock, who fathered them; forgotten the God who gave them birth.’ [Deuteronomy 32:16].  The example of Ancient Israel and the Song of Moses continues to warn us: ‘If only they were wise and would understand this and discern what their end will be!’, for ‘In due time their foot will slip; their day of disaster is near and their doom rushes upon them.’ [Deuteronomy 32: 29, 35]

In terms of the hazards the hedonistic push to end the concept of the nuclear family with a mum, dad and children, let us consider only the health risks individuals run in pursuing a ‘gay’ lifestyle.

Men who have sex with men (MSM) run much higher risks to health than monogamous heterosexual couples.  Lesbians also run substantially higher risks.  This article would be too long just to write down a list of the wide range of diseases these practices facilitate in the human body.  Some are almost unknown outside the LGBT community.

It is very strange that many governments, who have taken such draconian measures over the Covid-19 virus that in fact does not have much impact on the population-wide average life expectancy, have greatly facilitated the norming of LGBT lifestyles which have a catastrophic impact on the life expectancy of those who participate in them.

However, there are also significant health risks for heterosexuals who are not monogamous.  In the USA there are around 20 million new sexually transmitted disease infections every year.  The cost of treating these is around $16 bn each year.

The cost of treating HIV in a person’s lifetime is around $500,000.  HIV is primarily a disease that affects MSM, with HIV prevalence along gay men (and bisexual men) > 40 times that of heterosexual men.

However, the insurance system means the costs of treating them is borne by everyone, so this represents a massive tax on the healthy, subsidising those who have chosen to make themselves sick by their actions.  This insulates them from the full costs of their actions and so hides the problem.

Then, society will truly become sick, broke and dead.  Truly, an ideal weapon of mass destruction.

If there was ever a time for Christians to say ‘Enough is enough – either change course (repent) or we will make our own arrangements’, now is the time. God bless,