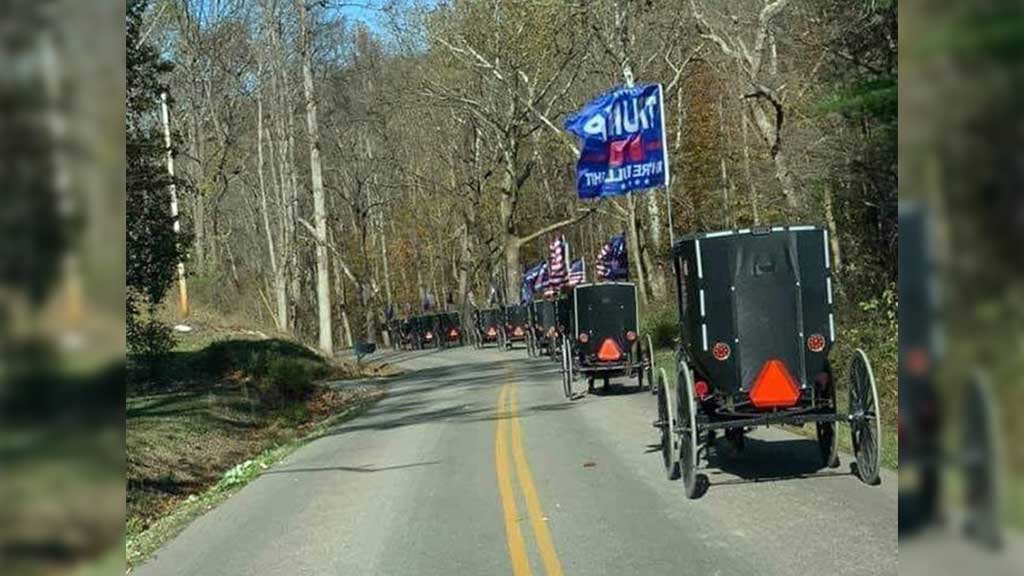 The US presidential election has illustrated more graphically than ever before that we are living beneath an erupting civilisational volcano.

The flaming cultural lava is spreading well beyond America. We have to wonder whether we are now watching the steady asphyxiation in the west of both liberalism and democracy.

Nowhere is waiting with greater apprehension for the eventual outcome of the election than Israel. If President Donald Trump is finally edged out, the recent startling prospects for peace in the Middle East may well be extinguished by the hideous prospect of a terrible war.

Those who most threaten the Jewish people, as well as the peace of the world, have been banking on Joe Biden winning the presidency.

He has said he will reactivate the Iran nuclear deal from which Trump withdrew the United States. This would open the cash spigots for the Iranian regime, ending the financial pressure under which it has been weakened.

It would instead be enabled to resume its regional power grab, ramp up its attacks on Israel through its Palestinian and Lebanese proxies, and speed up its development of nuclear weapons with which it intends to wipe out Israel and attack the west. War between Iran and Israel would become much more likely.

There would also be a domino effect in the Arab world. The unprecedented moves by the Gulf states to normalise relations with Israel have been driven principally by their perception that Trump was determined to neutralise Iran, and that their interests therefore lay in an alliance with Israel and America.

If America reactivates the nuclear deal, these Arab states may well revert to the strategy they adopted during the Obama administration’s appeasement of Iran: to cosy up to the “strong horse” in the region, which would once again be the Iranian regime.

And a Biden administration, reflecting the increasing hostility to Israel within the ever-more radical Democratic Party, would be used by the Palestinians to reignite their terrorist and diplomatic onslaught on Israel which, under the pressure from Trump, had been dampened down.

Beyond this looming Middle East disaster, the election has dealt a devastating blow to America’s standing and authority in the world.

For as has now been laid bare, it is split into two nations. One is determined to uphold and defend its historic identity and the core values of political liberty, the rule of law and moral decency that underpin the west. The other is determined to destroy them.

Whether or not Trump is correct to claim that the Democrats tried to cheat him out of victory, each camp will think it has been swindled, whatever the eventual outcome, and that the incumbent in the White House is illegitimate.

On each side, therefore, this undermines the legitimacy of government, the responsibilities of citizenship and faith in democracy itself.

Even deeper issues are at stake. This was illustrated by the remarkable sight on Tuesday of the Amish of Pennsylvania, who normally don’t vote at all, driving in a stream of horse-drawn buggies flying the Stars and Stripes to cast their vote for Donald Trump.

For these and other deeply conservative religious believers, Trump was the only thing standing between them and the collapse of the moral fabric of their society.

Such support from people of stern religious faith is utterly incomprehensible to those who believe Trump is a cross between Mussolini, King Louis XV and Caligula.

Staring aghast at what they can no longer deny is a mighty cultural force-field of what they call “Trumpism” extending far beyond the man himself, his foes simply can’t understand how anyone can consider any of this to be a force for good. And they never will.

That unbridgeable cultural chasm now divides people in the rest of the west, including Diaspora Jews.

They’d had enough of the Democrats’ contempt for law and the constitution, from the frustration of attempts by federal agencies to apprehend illegal immigrant felons to the ensuing conspiracy between Democrat bigwigs, administration officials and the media to lever Trump out of office through dishonest and unlawful means.

Trump promised these abandoned millions that he would put American interests first, delivering employment to those who had been left behind and upholding the constitution and the rule of law. And that’s what he delivered. As a result, he actually increased his support among those whom the left purported to champion against him, such as African-Americans or Hispanics.

This has been a shattering repudiation of left-wingers’ key belief — that they stand for the poor and oppressed against Trump’s racism and callousness. They won’t learn from this, but will double down on those who voted for him on the basis that this proves their lack of intelligence and moral refinement.

Already, some of these Democrat supporters are claiming that this minority support for Trump was another example of “white privilege.” In similar Orwellian fashion, they claim that injustice is social justice, violence is freedom, and hatred of white people is “anti-racism.”

This anti-west agenda, which has captured the minds of millions, amounts to an erasure of cultural memory and the refusal to transmit that culture to future generations. And that’s the west’s death warrant.

The Jewish people have survived the repeated attempts throughout history to destroy them only because they have internalised a sacred duty to protect their cultural memory and transmit that culture to their children.

In Britain and mainland Europe, the Jews are now trapped inside this civilisational onslaught against the west. As a result, they are in the cross-hairs of the left, the far-right and the Islamists. Whenever a culture is in deep trouble like this, the Jews get it from all sides.

But just as America is divided, so the Jewish world is also now divided within itself.

The Jews of Israel are determined to survive. The Jews of America are steadily destroying most of their community, probably reducing in number over the next couple of generations to a rump of observant Jews who will be regarded with as much interest as are the Amish of Pennsylvania.

The west has divided into two worlds—those who are preserving that strand and those who are trying to snap it.

Jews who voted for Trump remain firmly in that first world. And along with many of the Jews of Israel and everyone else hanging on to that fragile strand, they are gazing in dread and despair at what America has now become.