Don’t Judge Islam by the Actions of a Few Muslims, Says Leading Cleric 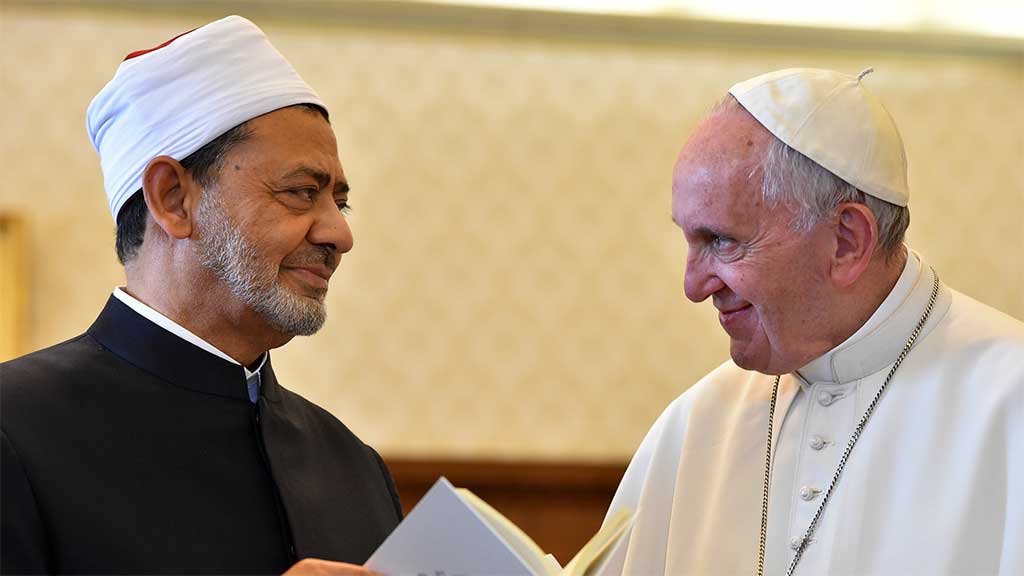 Recently, while decrying “Islamophobia,” Sheikh Ahmed al-Tayeb—one of the world’s most influential Muslims who so many Western leaders including Pope Francis trust and listen to—said:

We do not hold the Christian religion, nor Christ [peace be upon him], nor Moses [peace be upon him] responsible for the terrible massacres of Muslims by believers of other religions. We do not label a religion by terrorism, violence or brutality. We remain deeply aware of the vast difference between religions’ teachings, and the traders of religions.

Although he raises an excellent point—the need to distinguish between religious teachings and the practitioners of said religions—it does not support his ultimate point, that “Islam rejects violence among people of any religion.”

True, people of various religious backgrounds, including Jews and Christians, have done and likely will continue to do some rather horrible things. Equally true, their religions should not be conflated with or blamed for their bad deeds.

Unfortunately for al-Tayeb, however, a number of “problematic” activities by Muslims trace straight back to certain Islamic teachings and legacy.  This includes attacking and or killing apostates (born Muslims who wish to leave Islam) as well as “blasphemers” (anyone who speaks critically of Islam); the treatment of women as chattel, the permissibility of polygamy (up to four wives), child-marriage; systemic discrimination against all things non-Muslim (e.g., religious minorities, churches, etc.); and, of course, jihad—armed warfare against non-Muslims in order to bring the entire world under Islamic rule.

There is no escaping it: the above activities, which directly oppose the modern world’s values, are promoted in Islamic texts, and even in modern day Islamic literature; they have been on active display throughout the Muslim world’s past and present.

Worst of all, at least in the context of this article, is that, of all people, Sheikh Ahmed al-Tayeb knows this to be true.  After all, the institution he heads, Al Azhar University in Egypt, teaches all of these things in its curriculum.

As Sheikh Muhammad Abdullah Nasr, a scholar of Islamic law and graduate of Al Azhar, once said after being asked on live television why his alma mater refuses to denounce the Islamic State as un-Islamic:

It can’t [condemn the Islamic State as un-Islamic].  The Islamic State is a byproduct of Al Azhar’s programs.  So can Al Azhar denounce itself as un-Islamic?  Al Azhar says there must be a caliphate and that it is an obligation for the Muslim world [to establish it].  Al Azhar teaches the law of apostasy and killing the apostate.  Al Azhar is hostile towards religious minorities, and teaches things like not building churches, etc.  Al Azhar upholds the institution of jizya [extracting tribute from religious minorities].  Al Azhar teaches stoning people.  So can Al Azhar denounce itself as un-Islamic?

As discussed in this article, many other Al Azhar insiders have accused the Islamic university of the same things.

At any rate, from here one can better understand another assertion made by al-Tayeb during his recent condemnation of “Islamophobia.”  He said:

Up to this moment, we never heard about Christianity-phobia, Judaism-phobia, Buddhism-phobia or Hinduism-phobia. I believe that no newspaper or a channel or TV program in the West or in the East dares to speak about a phobia of any other religion or belief.

Of course, they don’t.  That’s because, whereas people have little reason to fear Christianity, Judaism, Buddhism, or Hinduism, they do, for the reasons explained above, have reason to fear Islam.