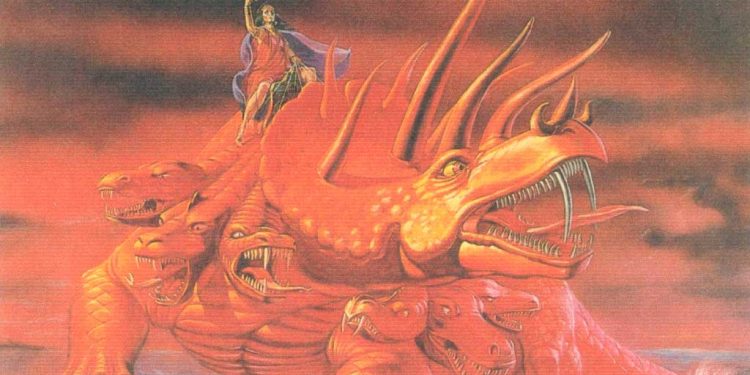 In our previous article on the message of the Angel in Revelation 14, we covered the first two commands to the mankind: to fear God and to come out of Babylon the Great, the luxurious economy that would arise in the last days. This Babylon the Great we unambiguously identified as the modern technological globalised economy, financed by debt, which the Bible prophecied will fall catastrophically, never to return. God’s people are commanded to ‘come out of her’, which we infer to mean that we need to find ways to together become no longer dependent on this technological economy, at least to the point where we would well survive its collapse.

The imagery of this Babylon the Great is that of a prostitute riding a creature The Book of Revelations describes as the ‘Beast’. In this imagery, the Beast has seven heads, ten horns, comes out of the sea (representing humanity) and makes war on God holy people and overcomes them.

Few images in the prophetic Book of Revelation, the last book of the Bible, have aroused such curiosity as to the image of the Beast. We know from the other great book of Biblical apocalyptic prophecy, the Book of Daniel, that such imagery stands for empires or empire-like political powers in the world, but which empire does the Beast represent?

Various suggestions have been made: the Roman Empire, the European Union, the Catholic Church, the Protestant Church, to name a few, but to see if any these interpretations are correct we need to read carefully the scriptures and see if these can be correlated with history or current affairs in a way that does justice to the text of scripture. We must try to avoid reading into the text our own preferred narratives.

So, what does the text tell us?

‘And I stood upon the sand of the sea, and I saw a beast ascending out of the sea, having ten horns and seven heads and upon his horns ten diadems and names of blasphemy upon his heads. And the beast which I saw was similar to a leopard and his feet were like the feet of a bear and his mouth like the mouth of a lion, and the dragon gave him his power and his throne and great authority. And I saw one of his heads, like what has been slaughtered to death, and his deadly wound was healed and the whole earth marvelled after the beast; and they worshipped the dragon who has given his authority to the beast, and they worshiped the beast, saying, “Who is similar to the beast? And who is able to make war with him?”

And a mouth speaking great things and blasphemies was given to him, and authority to practice war forty-two months was given to him. And he opened his mouth to blaspheme toward God, to blaspheme his name and his tabernacle, and blaspheme those who are residing in the heaven. And it was given to him to make a war with the holy-ones and to overcome them and authority over every tribe and people and language and nation was given to him. And all who are dwelling upon the earth will worship him, everyone whose name has not been written from the conception of the world in the Book of Life of the Lamb who has been slaughtered. If anyone has an ear, let him hear. If anyone holds those in captivity, he is going into captivity; if anyone kills with the sword, it is essential for him to be killed with the sword. Here is the endurance and the faith of the holy-ones.’ (Revelation 13: 1-10, MLV).

Those familiar with the Book of Daniel will be able to identify the historical empires of the lion, the bear and the leopard as the Babylonian, Persian and Greek empires. So we can assume that the region of these empires ruled over is included in the region ruled by this Beast.

Secondly, we read ‘they worshipped the Beast’ (and the Dragon, who represents Satan). The ‘they’ here are some of the people on the earth, who are in awe of or are intimidated by the Beast’s power.

Thirdly one of the Heads, or rulers, that led the Beast empire was killed, but it seems that head is healed and is well able to function again.

Fourth, it practiced war for 42 months. This same image of time period is given elsewhere in the Book of Revelation as the time the ‘nations tread the city underfoot for forty two months.’ (Rev 11:2).

So, let’s us ask specifically, what part of the world might the Bible have an interest in, which  an Empire was permitted to make war over and have authority over, that has a connection with ‘42 months’?

Three and a half years of itself does not make a lot of sense, but 42 months of years, i.e. around 1278 (42x 365.242/12) years, plus or minus a few years, does. This is the time that Muslims conquered and ruled the country of Israel (called Palestine by the Romans to disenfranchise the Jews). Muslim armies finally captured Caesarea in 640 AD, and ruled the land until the British Empire troops, under General Allenby, drove the Ottoman Empire out of Jerusalem in 1917 and all of the land in 1918. Muslims therefore had the authority over the land for 1278 years (1918-640).

Furthermore, construction of the Dome of the Rock in Jerusalem was started in 687 AD and probably took two years to complete, so it was finished in or around 689 AD. Israel defeated the Jordanian army and reclaimed the Old City of Jerusalem in 1967. This time period is also 1278 years (1967-689), or 42 months of years, thus fulfilling the prophecy in Rev 11:2 also.

From our vantage point in history, looking back down the centuries, we can now determine with little doubt that Islam is what the Bible is referring to when it prophecies about this ‘Beast’: –

Today, all around the world, Islam seeks to become dominant in every land. They are making war in many countries, specifically against Christians, people who are innocent of bloodshed and just want to live their lives believing the truth.

If we turn to Revelation 14 concerning what God wants mankind’s response to the Beast to be, we read:

‘If anyone is worshiping the beast and his image and receives a mark upon his forehead or upon his hand, he will also drink out of the wine of the fury of God which has been mingled undiluted in the cup of his wrath, and he will be tormented in fire and brimstone in the sight of the holy messengers and in the sight of the Lamb; and the smoke of their torment is going up forever and ever, and they have no rest day and night, who are worshiping the beast and his image and if anyone receives the mark of his name. Here is the endurance of the holy-ones, those who are keeping the commandments of God and the faith of Jesus.’ (Revelation 14:9-12, MLV).

The word ‘worship’ can also carry the meaning of bowing down to, as well as submission to.  Since the word Islam means submission, it is a significant word in this context. This verse suggests that it is the requirement of God, on pain of loss of salvation and eternal judgment, not to become a Muslim, nor even to accept the social imposition of Islam, such as the Pact of Omar. It is only by doing this that Christians will truly endure, even if it in God’s heaven.

Indeed, Rev 13:10 also says: ‘If anyone holds those in captivity, he is going into captivity; if anyone kills with the sword, it is essential for him to be killed with the sword. Here is the endurance and the faith of the holy-ones.’ This is both a warning to Muslims and an instruction to Christians where the rule of just law no longer reaches. This is not a  pacifist approach to the confrontation of Islamism, it is a law-abiding and law-enforcement approach. But then, if you read Luke 22:36, it is clear that in fact Jesus was not a pacifist, for a pacifist is not the same thing as a peacemaker.

For those who actively chose to be or remain Muslims, despite having heard the call of Christ, by which I mean you as a dedicated Muslim you follow the example and teaching of Mohammed: agree with and probably practice many of those Islamic practices of killing unbelievers, taqqiya, rape of unbelievers, temporary wives, pederasty (I won’t go on), the clarity of your eternal destiny is now, I hope, clear. Unless you repent of Islam and turn to Christ, I see no alternative, based on the pages of Biblical scripture, other than the flames of hell. You may not like that, but please remember this part of the Bible was written 500 years before the rise of Islam. We must have the humility of spirit to realise what it is Living God is saying to all of humanity.

‘I am the Alpha and the Omega, the beginning and the end. I will give freely to him who is thirsty out of the spring of the water of life. 21:7 He who is overcoming will inherit these things, and I will be his God and he will be my son. 21:8 But to the cowardly and unbelieving and sinners and detestable and murderers and fornicators and sorcerers and idolaters and to all the false witnesses, their part will be in the lake which is burning with fire and brimstone; which is the second death.’ (Revelation 21:6-8 MLV)

I am frightened by this verse, and I have been a Christian for 50 years, but I am encouraged that in Christ every sin and all iniquity can be forgiven and cleansed.  Nevertheless:

‘For when we sin willfully after the receiving of the full knowledge of the truth, then a sacrifice is left no more for us concerning sins, but a certain fearful expectancy of judgment and a zeal of fire which is about to devour the adversaries. Anyone who has rejected the Law of Moses, dies without mercy upon the word of two or three witnesses. How much worse punishment, do you think he will be deemed worthy of, who has trampled underfoot the Son of God, and has deemed the blood of the covenant in which he was sanctified as common, and has insulted the Spirit of the grace? For we know him who said, “Vengeance is for me. I will repay says the Lord.” And again, “The Lord will judge his people.”  It is a fearful thing to fall into the hands of the living God.’ (Hebrews 10:26-31 MLV)

I cast by soul upon the grace of Christ to gave himself for the remission of my sins and yours. Receive Christ as your Lord and Saviour and bow and worship to Him alone.