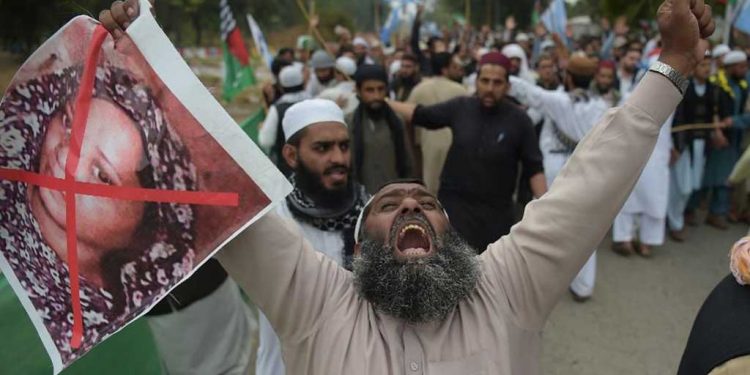 That man in the photograph looks really, very, very cross.  Holding the photo of a sad-looking Asia Bibi with a big cross taped her face, he is yelling at the top of his voice, presumably calling for her to die.  For him, as a good Muslim, it should be enough that when a Muslim accuses a filthy Christian of blasphemy, of course that Christian should be killed.  If any lawyer should have the impertinence to defend her, then he too is a blasphemer and must be killed.  Any Supreme Court judges who are unwilling to accept the word of Muslims, however contradictory their testimony, they should die too.  How can those Supreme Court judges exonerate someone as filthy, despicable and downright evil as a Christian, who refuses to believe in Allah and accept Mohammed as his prophet?  To be a Christian is to be worthy of death – is that not the very essence of Sharia Law?

Recently the judges at the European Court of Human Rights handed down a judgement that was remarkably similar to the view of that Pakistani – that no-one had the right to criticise the founder of another religion (Mohammed in the case they ruled on) if its followers were offended by such criticism.  Since certain Muslims are, let’s face it, quite easily offended, their ruling makes any commentary about Mohammed in Europe pretty much a criminal offence.  Europe has not got around to awarding the death penalty to such dastardly speech, but we can now all see the how the dots join to make a pretty solid line from here to there.  (What the honourable judges may not have taken into account is that by their ruling, the standard Islamic call to prayer should henceforth be banned in Europe, as it is offence and blasphemous to Christians.  I await that test case with bated breath.)

The facts of Asia Bibi’s case are these. Having been told by her Muslim neighbours that, no, she could not have a drink of water from the same place as them, because she was a filthy Christian and they were pure Muslims who did not want to be contaminated with her filth.  Her reply was that she believed in Jesus, the Saviour of mankind, and she then went on to ask a question: ‘who did Mohammed save?’

She made no direct criticism of Islam, she merely asked a question, and for a religious person interested with the concept of salvation, what it achieves and its source, her question is not an unreasonable one.  For asking it, she was accused and found guilty of blasphemy and sentenced to death.  For ten years she has been in solitary confinement, awaiting her sentence.  All over sip of water.

Now that the Supreme Court of Pakistan has expressed the shocking view that not only was their insufficient evidence to convict (But she’s a CHRISTIAN!   What more evidence does one need?) but that as a person she had an equal right to being held innocent until proven guilty.  What?! A Christian held innocent!  No wonder Pakistan is up in arms.  No non-Muslim should be held to be innocent, surely?

The idea that the Pakistan legal system holds people innocent until proven guilty is a protection of us all, the judges argued.  The mob insist, however, that the word ‘all’ cannot possibly include filthy non-Muslims.

Pakistan, in agreeing to a legal process to review the judgement and prevent Asia Bibi and her family leaving Pakistan (thereby making it easier to murder them) has in effect put itself in the dock. Is the nation to be ruled by the rule of Law as set out in the Constitution and the laws of the land, or will it be ruled by the enraged mob who are only motivated by their blind hatred of those they have failed to convince to convert to Islam.  Personally, I do not find blind hatred, mob rule, death threats and murderous intent such particularly attractive or comely features of the Islamic religion that should cause me to freely bow down and say the Shahadah.  In fact, right now, I would not do it under any circumstances whatsoever, even if for no other reason than that I would not want to give such people the satisfaction.

Let’s face it, in any reasonable system of fairness and justice, what the Pakistani mobs are calling for is pure evil – and in doing so are advertising their evil to the world.  If the State of Pakistan sides with them, they too will have embraced evil as their guiding principle and, once done, that can never be undone.  How the court of opinion finds the State of Pakistan will now depend on what they decide.

The United Nations, that noble international standard bearer for human rights, has throughout this had far more to say about the rights of French Muslim women to wear the hijab than the awful situation of Asia Bibi – who has now become a global symbol of the persecuted Church.  In contrast, the United Nations has once again revealed itself to be a vile, hypocritical, useless burden, far more concerned with, to take one example, persuading young people through their education systems to live lives of what can only be called debauchery, than genuine human freedoms.

But the real villain, brooding malevolently in the dock, is Islam itself, the arch manipulator of nations, mobs and individuals, actively robbing people of justice and persuading others to become its slave warriors, threatening them with unspeakable horrors if they do not comply.  Islam would have the whole world be as Asia Bibi is now – rotting in a planetary prison, in fear of its life, enmeshed in a set of ludicrously fallacious beliefs that compel people to make victims of others, all the while reassuring its ardent followers they are being undoubtedly righteous.

Ladies and gentlemen of the jury, how do you find against the defendants?  Guilty, or not guilty?

The Lord is near

Persecution - No Surprise for Christians