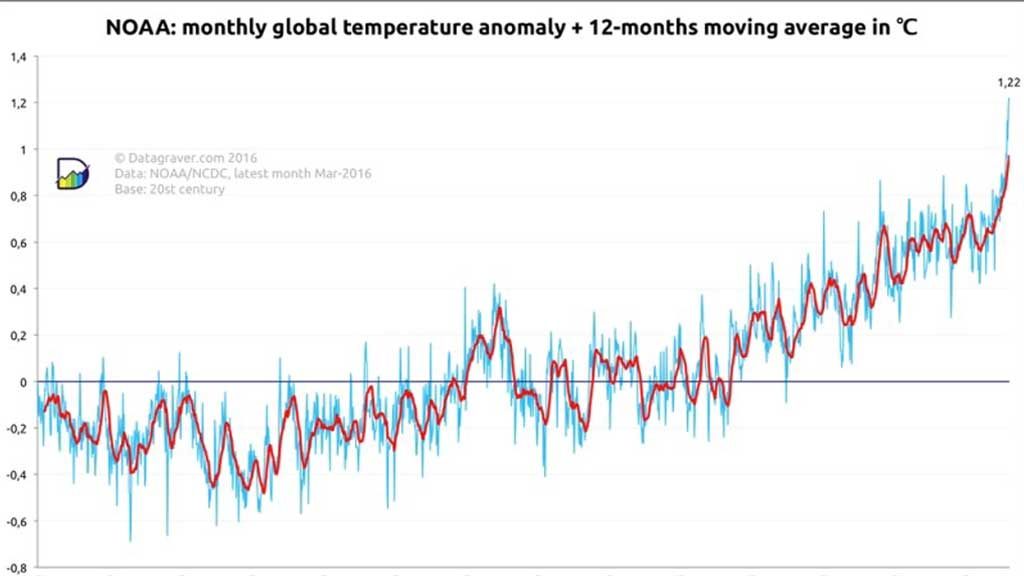 You may think that this is not a relevant topic for a Christian website seeking to help Muslims and those living in Muslim cultures understand Christianity.  But the Muslim world is today hugely influential, not least because God in His infinite wisdom has granted to the Muslim world possession of the majority of the petroleum resources on the planet, a resource that has greatly empowered their rise from poverty, defeat and technological backwardness to riches, influence, military power and technological acquisitiveness.  Climate change is therefore a highly relevant consideration, whether one wants less of it (because it’s getting too hot), or more of it (because selling oil and gas is the most profitable business in the history of the world).

Christianity is an evidence-based religion – it is based on the premise that truth matters, all truth.  Whether it is historical truth, revealed truth or scientific truth, truth is truth.

Did certain events happen?  Has God really reveal His Word to the world?  Do we understand nature and the cosmos?  To what degree do we know these things?  All these questions are important, for great scholars as well as simple people.  Long gone are the days when Christians taught their Sunday school class: ‘Don’t question God.’  Of course you ask questions of God – ‘Seek and you shall find.  Ask and you shall receive.’

Many people still say Climate Change is a hoax.  The president of the United States of America said it.  I look at three things: the scientific report published by the IPCC (the Intergovernmental Panel on Climate Change), the change in the climate of my own country, the UK, since I was a child 60 years ago, and the Bible.

The Bible?  What could the Bible possibly have to say about climate change?  The Bible is about one quarter prophecy.  If climate change is going to have the global impact scientists say it will, then if the Bible confirms that, it suggests not only that Climate Change is going to have a big impact, but also that the prophetic function of the Bible has value to mankind and is worthy of study.  It also suggests that, maybe, the Bible has something useful to say about what we can do about Climate Change.

I have read all of the major scientific reports produced by the IPCC, compilations of scientific studies from thousands of scientists working across the Globe.  I find the evidence compelling, with both theory and observation confirming a warming trend that is already outside the limits of the variation that the world has seen since the start of the Bronze Age, at least – i.e. the timespan of human history recorded in the Bible.

I remember the snows we used to have in London where I grew up.  I remember the feet of snow that fell for example in the winter of 1962.  I was ill with pneumonia, and I watched as the snow fell thickly.   The day after it stopped, little black flecks appeared.  Day by day these grew in number until within a week the snow looked grey and after a month it was black, all from the soot particles that came from millions of coal fires, thousands of factories heated by coal and tens of coal-burning power stations.  All that coal went somewhere.  What did not fall back onto the snow as unburned carbon went into the air as carbon dioxide, and sulphurous smog.  The smog did me no good and I only really recovered when my family moved to the edge of London where the air was much cleaner.

London rarely has snow now, and when it does we have a little flurry and soon after it’s all melted.  Most years we do not have snow, even in the countryside.

Twenty years five ago I had a conversation with a Danish engineer, twenty years my senior.  When he was a boy in the 1930s Denmark would have a metre of snow most winters.  Now it hardly has any.

Yes, of course the climate has changed.

If you live in a continental temperate climate, as opposed to a maritime temperate climate, then you will experience hotter summers and colder winters than we do in Britain, so the 1 degree Centigrade rise is less easy to spot, but it is still there.  It is experienced mostly in the temperatures of the clear winter nights – they are not as cold as they once were.  The greater amount of carbon dioxide and methane and other warming gases have made the atmosphere more opaque to the infrared radiation leaving the surface of the earth into space.  This makes the earths surface no longer in the temperature equilibrium it had for millennia.  It is warming and continues to warm as the atmosphere becomes more opaque decade by decade.

One effect of that jolt are rising sea levels as the ice caps melt and the sea warms and expands, giving rise to storm waves and surges flooding coastal areas more frequently and more severely.  Low-lying areas are already losing land to the sea.  This will only continue.

Now, listen to what Jesus says in his famous prophecy concerning the end of the age, recorded in Luke’s Gospel:

‘And there shall be signs in sun, and moon, and stars, and on the earth [is] distress of nations with perplexity, sea and billow roaring;

men fainting at heart from fear, and expectation of the things coming on the world, for the powers of the heavens shall be shaken.

`And then they shall see the Son of Man, coming in a cloud, with power and much glory;

and these things beginning to happen bend yourselves back, and lift up your heads, because your redemption doth draw nigh.’ [Luke 21:25-28, Young’s Literal translation]

‘Sea and billow roaring’ is the most obvious early indication of climate change.  It isn’t that the sea suddenly has waves or the wind blows, it is that this is now becoming a distressing problem – part of a larger problem that on the earth is a source of ‘distress of nations’ and will become worse during the coming decades well past the turn of the next century.

This happening because, as Jesus put it using pre-scientific language, ‘the powers of the heavens [which in the Hebrew mind includes the air, or atmosphere] will be shaken.’  The word shaken includes the idea of a jolt or a perturbation.  This phrase could just as accurately be translated ‘the energy flows of the atmosphere will be perturbed’.

Over the last thirty years there has grown over Asia an enormous ‘brown cloud’ of haze and soot that stretches across India, Indonesia and Japan but is most concentrated over China.  It used to be called by scientists the Asian Brown Cloud, but national political reputations are easily offended, so it is now called rather less informatively the Atmospheric Brown Cloud, or the ABC.

This cloud has grown in size and optical depth to the point where over for 2.5 billion people the amount of light reaching the earth is reduced by around one sixth.  What is not well known is that for every 1 percent reduction in diffuse light reaching the earth due to haze, the specular or direct light that comes from ‘point’ sources of light like the sun, or moon, or stars reduces by 2%.  The research that observed that relationship was undertaken in the early days of concentrating solar technology, but outside that field is not widely known. I know it because I used to be the CTO and then CEO of a high-technology company developing concentrating solar technology.

The consequence of this rapid emergence and increase in the Atmospheric Brown Cloud is that for a third of the earth’s population they have experienced on average a one third decrease in the direct light that reaches the ground.  Now consider these words from the Book of Revelation:

And I saw, and I heard one messenger, flying in the mid-heaven, saying with a great voice, `Wo, wo, wo, to those dwelling upon the land from the rest of the voices of the trumpet of the three messengers who are about to sound.’ [Rev 8:12-13, YLT].

The extent and depth of the phenomenon of the ABC is a direct fulfilment of the Fourth Trumpet of the Book of Revelation.  This prophecy goes on to tell us that after this, the last three Trumpets are going to be far worse than the first four.

There is, of course, a direct link between the ABC and climate change.  All that haze and soot arises from burning fossil fuels, mostly coal, and clearing forests and burning wood fuel in open fires, which releases methane, a powerful warming gas.

One of the predicted effects of a warming ocean is a reduction in the oxygen solubility of the seawater.  This is predicted to produce severe reductions in the size of fish populations in the sea.  The models suggest that this impact will start to be noticeable around 2040 in the Pacific Ocean but will be severe and widespread across all oceans by the end of the century.  Although the scientific prediction needs further verification, it is nonetheless startling to read the following:

‘And the second messenger did pour out his vial to the sea, and there came blood as of [one] dead, and every living soul died in the sea.’ [Revelation 16:3, YLT].

This passage is the second of the seven bowls of the wrath of God, the last cycle of judgments prophesied in the Book of Revelation.  We need to get past the emotional impact of the vivid imagery of the language to unpack what Christ is telling us.  What is it about the blood of a person who just died?  What happens to it?  It rapidly deoxygenates.  It becomes anoxic.

What species would be regarded as ‘living souls’ in the sea?  We have no Biblical parallel to inform us about this, but a reasonable guess might be the most intelligent sea creatures: dolphins, porpoises and whales, perhaps.  Given that most of these animals are at the top of the food chain, this implies a catastrophic decline in ocean productivity.  Whether this is caused by the anoxia or is an event parallel to it we cannot as yet say.

Later on in the same cycle of prophesies we read this:

‘And the fourth messenger did pour out his vial upon the sun, and there was given to him to scorch men with fire,

and men were scorched with great heat, and they did speak evil of the name of God, who hath authority over these plagues, and they did not reform — to give to Him glory.’ [Revelation 16:8-9, YLT].

When the Twin Towers and the Pentagon were attacked (9-11) the USA grounded all flights across and into and out of US airspace.  Within hours all the contrails evaporated and the upper atmosphere cleared.  Over two days the temperature of the country rose by 2 degrees Centigrade as a result of the greater amount of sunlight reaching the ground.  There was quite a lot of scientific speculation that all the contrails and other pollution was masking the true effects of carbon dioxide and other warming gases, and that were all this haze and contrails to cease, the global temperature might jump up severely.

We know that to control global warming we have to reduce and finally stop burning fossil fuel and then in fact go on to reabsorb carbon dioxide from the air, an incredibly difficult task.

Might there be a time when in the pursuit of the goal it appears as though things have got worse?  Instead of putting the blame where it lies, mankind blames God for its miseries.

In Part 2 of this series, I will be examining what might be done about Climate Change in the light of what the Bible indicates should not be done, as well as what can be done. God bless you.