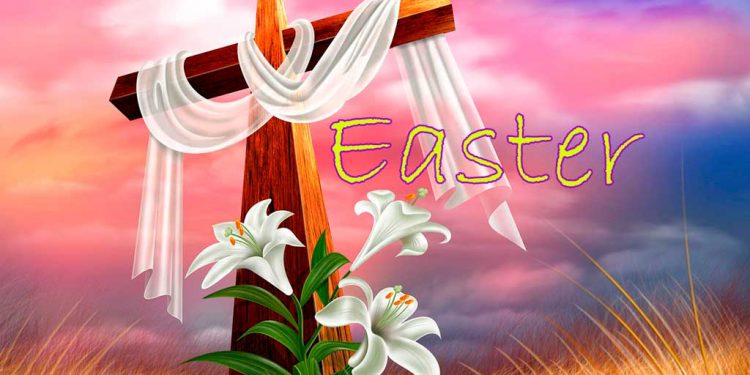 Easter commemorates the resurrection of Jesus Christ. It is the most important Christian festival, and the one celebrated with the greatest joy.

The date of Easter changes each year, and several other Christian festivals fix their dates by reference to Easter.

Churches around the world are filled with flowers, and there are special hymns and songs.

On Good Friday, Jesus Christ was executed by crucifixion. His body was taken down from the cross, and buried in a cave.

The tomb was guarded and an enormous stone was put over the entrance, so that no-one could steal the body.

On the following Sunday (the third day after His crucifixion), some women visited the grave and found that the stone had been moved, and that the tomb was empty.

Hallelujah; Jesus had overcome death. God had raised Jesus from the dead. He was resurrected and was seen by His disciples and afterwards by many people.

Easter is the fulfilled prophecy of the Messiah who would be persecuted, die for our sins, and rise on the third day (Isaiah 53). Remembering the resurrection of Jesus at Easter is a way to renew daily hope that we have victory over sin. Amen.

The Importance of Easter

Psalm 22: An Amazingly Accurate, Faith-Building Prophecy of Christ’s Death on the Cross

How correct it is to celebrate Jesus´ birth on December 25th?

The Event that Changed the Universe – Who gave you this authority?

How Christ dealt with violence?

The Importance of Easter

What is Ash Wednesday?

Who is Jesus Christ?

The Miracles That Jesus Performed

Psalm 23 – The LORD Shepherds His People