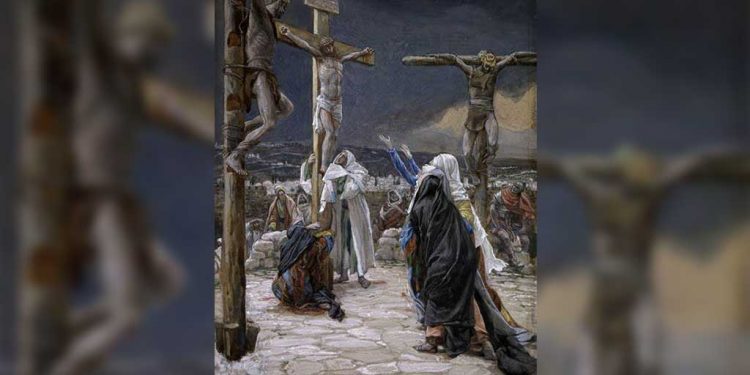 The death of Jesus on the Cross is a sure and historical fact.  Any attempt to argue that Jesus was not crucified, or survived crucifixion, runs into a cliff-face of evidence that cannot be explained away.

One thing is beyond credible challenge: all of Jesus followers were convinced that Jesus had died on the Cross, and even more remarkably within a few days become convinced that this same Jesus had been raised from the dead by the power of God.  Any attempt to explain the birth of the Church by some other means falls utterly flat.

However, when we come to explain WHY Jesus died on the Cross, by which I mean what was God’s purpose in having Jesus, the ‘Son of God’, ‘the visible image of the invisible God’, die on the Cross, we enter into a profound mystery, from which we can gain only some understanding of the character of God which determined such purposes, but we find ourselves looking in to a vastness of purpose and only being able to grasp but a fraction of the whole.

Nevertheless, we can perceive God purposes from 5 different perspectives.  I am grateful to Stephen Altrogge for his summary of these five points. (See https://theblazingcenter.com/2019/04/why-did-jesus-die-on-the-cross.html).

1.Jesus died to pay the penalty for our sins

‘For the wages of sin is death, but the free gift of God is eternal life in Christ Jesus our Lord’ [St. Paul, writing in Romans 6:23].

Because God is righteous and just, He absolutely must punish sin. If He were to let a single sin go unpunished, He would be unjust. So, the wages of sin is eternal, soul-crushing death in hell. The wages of sin results in eternal separation from God and the unending wrath of God.

But, God is also infinitely rich in mercy and grace.  He therefore punished Jesus on the cross for our sins instead of those who believe.  Jesus became the Lamb of God, the substitutionary sacrifice, who took our place.  God poured out all His furious wrath upon His Son. He was punished so that we could receive the righteousness of Jesus.

The penalty for our sins has been completely and totally paid. We do not have to pay for our sins because Jesus did it for us.  Indeed, we cannot pay for our sins.  Our good deeds do not balance out our bad deeds, any more than a murderer can be pardoned because they had once been helpful to others.

Without the sacrifice of Christ, we would be utterly and completely condemned for our sins.  And yet it says in Romans 8:1, ‘There is therefore now no condemnation for those who are in Christ Jesus.’

All the condemnation that was rightfully ours was poured out on Jesus. He stood before God, the Judge of the World, and heard the word, “Guilty!” pronounced over Him. That word should have been pronounced over us, and yet it was pronounced over Christ.

If you are in Christ, you have absolutely ZERO condemnation from God. Instead, God pours unending, infinite love upon you.  Jesus was condemned in our place.

St. Paul wrote this: ‘Who shall bring any charge against God’s elect? It is God who justifies. Who is to condemn? Christ Jesus is the one who died—more than that, who was raised—who is at the right hand of God, who indeed is interceding for us.’  [Romans 8:33-34]

‘But now in Christ Jesus you who once were far off have been brought near by the blood of Christ.’ [Ephesians 2:13].

We were once separated from God, cut off from Him because of our sins. We were enemies of God, alienated from His presence, unable to draw near to Him. On our own, we could do absolutely nothing to remedy this problem.   And so, God took the initiative.

We are so near to God that we are united to Christ. Jesus described this as Him being in us and us being in Him.  Nothing can ever separate us from Christ.

As St. Paul wrote, ‘For I am sure that neither death nor life, nor angels nor rulers, nor things present nor things to come, nor powers, nor height nor depth, nor anything else in all creation, will be able to separate us from the love of God in Christ Jesus our Lord.’ [Romans 8:38-39]

Jesus said, ‘Greater love has no one than this, that someone lay down his life for his friends.’  [John 15:13].

There is no greater demonstration that God loves you than Jesus dying for you on the Cross.  He spoke to us about His love for us with action, so much louder than words.

On the Cross Jesus cried out, “My God, my God, why have you forsaken me?”   Jesus was cut off from his Father by ‘being made sin for us’. Why?  To save us; to rescue us from our sins.

The only possible reason He was willing to go to such lengths to save us was because of His measureless love.

Jesus said this, ‘For God so loved the world, that He gave His only Son, that whoever believes in Him should not perish but have eternal life.’  [John 3:16].

Without the death of Jesus on the cross, we would be condemned to eternal death. As we noted above, the wages of sin is death.  Hell was our deserved destination, until Jesus stepped in and rescued us.

On the Cross, the eternal God received in His body the death that we deserved. Only an infinite God could take such a punishment.

But death could not hold Him. God raised Him from the dead, and now He has the power to give eternal life to all who believe in Him.

Now in Christ, we have everlasting life.  Death holds no fear for us, for we know that death is not the end. We will be with Christ forever. St. Paul could say with complete assurance that ‘to live is Christ and to die is gain.’

What is the condition we need to fulfil to inherit this gift?  The Scriptures say this: ‘Repent and believe’.  First, we need to believe in Jesus, to put our trust in Him, that He is who He says He is and His offer for us is true.  Second, we need to follow Him, which means learning from Him and imitating Him and learning to do what He said.  This is how He put it: ‘If you love Me, you will obey My commandments.’  And His commandments can be summed up in His New Commandment: ‘Love one another as I have loved you’.

Only the two together is truly believing in Him.

Jesus said, ‘Take my yoke upon you and learn from me, for I am gentle and humble in heart, and you will find rest for your souls.’  [Matthew 11:29]. God bless you,