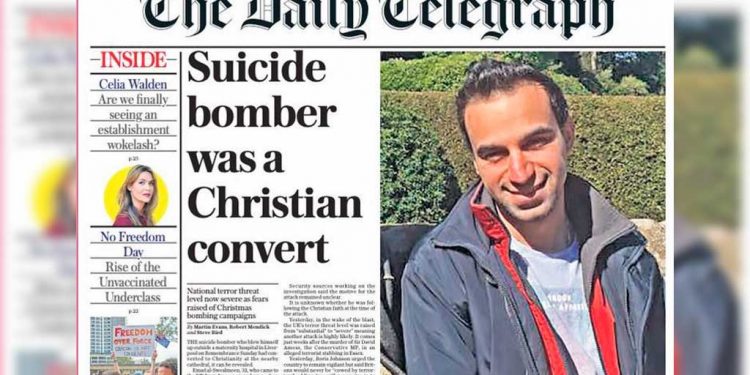 On the front page of nearly every paper in the UK were headlines like this one: ‘Suicide bomber was a Christian convert.’  The impression every paper wanted to give the public was obvious: it’s not only the Muslims who blow up people.  The Christians are at it too. The only folks you can trust are the atheists.

Possibly in an extremely limp-wristed attempt at fairness, The Daily Telegraph opined in its three-page spread the astonishing sentence: ‘It is not known if the bomber continued to be a follower of Christianity.’ In the circumstances, this sentence competes for both the award for the most ignorant sentence ever committed to print and the award for the most asinine.  I just cannot make up my mind.

Now, Mohammed taught commands like: ‘Fight those who do not believe in Allah or in the Last Day and who do not consider unlawful what Allah and His Messenger have made unlawful and who do not adopt the religion of truth from those who were given the Scripture – [fight] until they give the jizyah willingly while they are humbled.’  [Sura 9:29], and would explain why: ‘Indeed, Allah has purchased from the believers their lives and their properties [in exchange] for that they will have Paradise. They fight in the cause of Allah , so they kill and are killed.’ [Sura 9:111].

Despite this, for decades, the entire British Press has remained resolutely incurious as to whether there could possibly be the remotest possible connection between Islamic doctrine and Muslims blowing stuff up and killing people who were often complete strangers to them.  The British Press would refuse to mention the M-word, ‘There is nothing to see here.  Move along.’

However, the one time, the one time, it appears that the bomber, an Muslim immigrant with Syrian and Iraqi parents, attended church (although he almost certainly stopped well prior to his failed attempt at detonating a Remembrance Day service at his former church, unless he was practicing a particularly deep form of taqiyya), nearly every British Newspaper suddenly throw off their impenetrable cloaks of studied indifference to the religious and theological background of the perpetrator, and trumpet from their front page headlines – ‘See – he was a Christian!’, or words to that effect.

The Daily Telegraph did attempt to inject a moment of reflection into all the breathless hysteria, but the best they could come up with backfired spectacularly: ‘It is not known if the bomber continued to be a follower of Christianity.’

I cannot help think that almost anybody who knows even anything about Jesus Christ and being a follower of Jesus would be able to conclude, without overmuch thought, that anyone who decides to build a bomb in a taxi on their way to blow up a whole load of people in a church, or possibly a hospital, is definitely, and I really mean most definitely, no longer following Christianity.  A person does not need to know a lot about very much, and such a person really would not need to have the skills to take a nuanced view of complicated subjects, to almost immediately form the most definite opinion that such a bomber, really, really is not, and I repeat NOT, following Christianity.

However, such is the state of religious education in the British Press today, that even this is too difficult for them to grasp.  One can only hope the police working in anti-terrorism are a little more religiously literate.

After politicians, journalists are the least trusted professionals in the UK.

I can’t think why.

I think perhaps we should pray for journalists, as well as our politicians. (And do not forget the civil servants!)