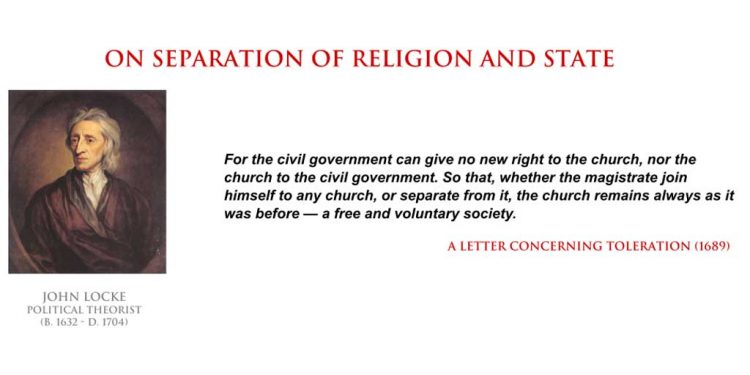 Any Google search on religion and state will bring up many references to the separation of church and state, a very contentious topic in the United States of America.  The argument in that country seems to be that that the atheists object to Christians holding office and bringing Christian ideas of society to bear on the formulation and conduct of policy, while the Christians object to the atheists using the separation of church as state as a pretext for imposing atheist ideas of society and claiming that this is what the framers of the First Amendment to the US constitution wanted.  It has polarised US society and continues to do so ever more and more.

However, many countries place religion at the heart of society.  For example, most Islamic states claim in their constitutions that Islam is the religion of the state.  There is certainly no separation of religion and state there.

When Alfred the Great first began to set about unifying the Kingdoms of Wessex with Mercia, Kent, Anglia and Northumbria to create England, he placed Christianity at the heart of the nation.  Every monarch when he or she ascends to the throne of the United Kingdom promises to, amongst other things, to the utmost of their power maintain the Laws of God and the true profession of the Gospel.   Nevertheless, in recent years, the government of the UK has gravely departed from this guiding and foundational direction.  Instead, the UK, to quote from the UK Defence Doctrine, ‘The UK’s success in using soft power is derived from pursuing a long-term narrative which depicts the UK as a competent, robustly inclusive country, whose actions are defensibly legal.  This builds trust.’

The UK’s promise to being ‘robustly inclusive’ has meant, amongst other things, promoting homosexuality and gay marriage in schools, regularly proclaiming Islam is a religion of peace after every Islamic terrorist attack, persecuting individuals who point out the dangers of Islam to the welfare and safety of the public and a breakdown of trust in the commitment of government to the public goodand diverting scarce police resources to prosecuting individuals who dare write negative comments about Islam in social media.  Indeed, it would appear that far from doing its ‘utmost to maintain the Laws of God’, the Government has replaced that commitment with being ‘robustly inclusive’, butpretends the two were essentially the same thing.

Several hundred years before, Lord Cecil, the Minister of State to Queen Elizabeth 1, understood that no nation could long endure being divided along religious lines.  ‘That state’, he said, ‘could never be in safety where there was a toleration of two religions. For there is no enmity so great as that for religion; and, therefore, they that differ in the service of their God can never agree in the service of their country.’  While such a view seems fine when a country is united in belief, it is problematic when it is not, and Lord Cecil certainly was involved in organising the persecution of Catholics (who wanted to overthrow Elizabeth 1).

Nevertheless, his wise advice has been ignored by recent UK and European governments which have organised the mass-immigration of millions of Muslims, who have now managed to have their own parallel legal system (Sharia courts), a parallel police force (at times) hold high office (Home Secretary and Mayor of London) and are increasingly determining social and government policy in the UK.  Far from building trust, trust in government is collapsing in the UK.

When St. Paul wrote Romans 13 he was writing to a church that was about to suffer a period of intense persecution, as St Paul had already suffered, at the hands of an Empire whose religion was pagan, certainly not Christian.  In this chapter he wrote:

‘Let every soul be subject to the authorities which are superior to him; for there is no authority if not from God, and the authorities which are, have been appointed by God. So-then, he who is resisting the authority is standing against the commandment of God, and those who are standing against it will receive judgment for themselves. For rulers are not a terror to the good works, but to the evil works. And you do not wish to be afraid of the authority, do you? Do what is good and you will have praise from the same; for he is a servant of God to you for good. But if you practice evil, be afraid; for he is not wearing the sword vainly; for he is a servant of God, an avenger for wrath to him who is practicing evil. Hence, it is a necessity to be subject to him, not only because of the wrath, but also because of conscience. For you are also paying taxes because of this; for they are ministers of God, persevering for this same thing. Therefore, give to all their dues: tribute to whom tribute; tax to whom tax; fear to whom fear; honour to whom honour.’ [Romans 13:1-8, Modern Literal Version (MLV)]

Let us unpack this a little.  A Christian should be subject to authorities – i.e. the legitimate government of the state and not resist the government, for the government has been appointed by God.  However, this begs the question, just because some band of men are wearing swords does not make them automatically agents of authority.  Startlingly, St Paul asserts that ‘rulers are not a terror to good works, but to evil works.’   For this to take place, a government must be able to distinguish good from evil.  Where are the principles and examples of good and evil to be found?  In the Bible.  Good and evil cannot be successfully formulated by man on his own.  Societies have been uniformly very bad at this.  It has become fashionable in the West recently for academics to start arguing that to believe in God is unethical, or that Jesus was not good and was ‘unethical’, but these arguments are simply a way of saying that the authors do not want to keep God’s laws.  What they cannot show is that God’s commandments or Jesus’ teachings are wrong.

Now, the further a state departs from good laws, just courts and fair incorruptible policing to evil laws, unjust courts and unfair corrupt policing, the greater the difficulty the Christian has in recognising the government of the state as an authority.  The purpose of democracy is to enable a population of right-thinking people to correct government error by voting in better governors.  Government’s that deny the people this corrective mechanism makes the difficulty greater.

However, when a government commits itself to a policy that is absolutely opposed to Biblical doctrine, then Christians have great difficulty, and, in all probability, the government has problems with the Christians.  On the one hand the Christians are persecuted, but on the other hand it must be pointed out that the state is weakened, not by the Christians but by the government’s evil laws or poor institutions.  Many studies have shown that the prosperity and success of a nation is chiefly determined by its institutions, and in turn the effectiveness of the institutions is determined by the philosophy that guides their operation and internal culture.  Christianity is good for nations.  So when, like the UK, Government discards Christianity in favour of either other ideologies like Islam or Communism or some mish-mash inclusivity that conceals diametrically opposed positions on virtually every aspect of life, the state is fundamentally weakened as it sags under the weight of the contradictions between its espoused policy and actual outcomes in the welfare of individuals, families and communities.

Therefore, it is no accident that since the Afghanistan government closed and demolished the last functioning church, that nation has experienced nothing but war and chaos from the following day onwards to the present for well over a generation.  It is no accident that as Pakistan continues to persecute its Christian minority due to its Islamic condition,it’s economy is in such a parlous condition it is having to reach out to the IMF for financial support.  It is no accident that as the UK embraces Islam and sexual licentiousness in a weird counter-cultural embrace having rejected the Christian faith of the nations forefather’s that enabled Britain to become great, for a time, the nation is sliding into financial and social despair.  I could go on.

As far as I can determine from my historical research, nations that embrace Christianity and Christian teaching stabilise and prosper, even in the most difficult circumstances.  And nations that reject Christianity and break the laws of God decline and, in the end, disappear from the pages of history, generally through war, famine, pestilence and depopulation.

The Bible gives us a uniquely detailed account of what happened to one nation, Israel, who rose to great heights through embracing God’s laws, and then declined into a diaspora through rejecting God’s laws and then person of Christ.  Interestingly, in these last days, as the prophets foretold Israel has been reborn and is prospering, even under the most trying of circumstances, and will continue to do, because the nation is fundamentally following the Law of God, although not without deviation.  And, not so long now, if we understand the prophets correctly, the day will come when the nation will repent and believe in Yeshua as the Messiah.  Israel is indeed an example, as St Paul wrote, an example to every nation.

Let every nation, ruler, governor and those in authority take heed.  It is my hope that in these days all the nations will listen to the commands of Jesus and learn to obey Him, from the greatest to the least of them.  I suspect, however, that what will happen is that only a few will follow Christ, and that the vast majority will reject His word and persecute those who are faithful.  The Scriptures prophesy what will happen to those nations.  They do not make comfortable reading. God bless you,