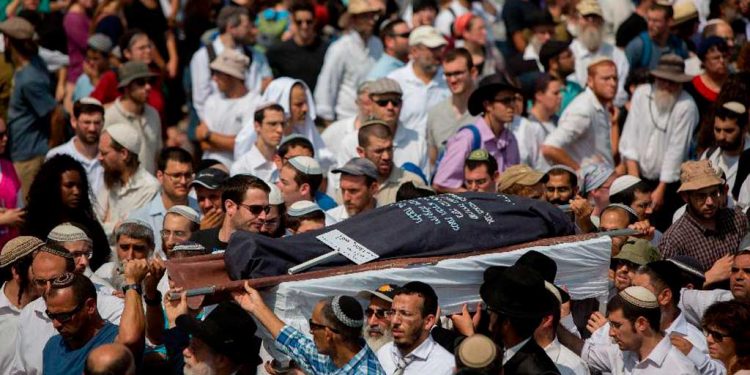 In Israel funerals has been held for two Jews who were murdered by an Arab in a drive-by shooting, which took place in Jerusalem. He wounded five others. He was eventually killed in order to stop him continuing to kill. The Muslim Arab was praised by the Palestinian Authority leaders for his actions and they called him a martyr.

Let us just think about what is really going on here.  Holy Scripture says in the Ten Commandments, ‘Thou shalt not murder.’ (Exodus 20), whereas the Quran seems to suggest that what the Bible would class as murder is in fact good and to be encouraged, if those whom are being murdered are ‘infidels’. If so, then according to my understanding of the Quran, such a killing does not count as murder, but as an action taken as part of Jihad, which, so many Muslim Imams have explained on You Tube, is to be encouraged.

But, what did those victims do to earn such an end?  Nothing, apart that is, from being born, and finding themselves born as Jews.

So, Holy Scripture says, ‘Thou shalt not murder,’ while the Qur’an encourages people to engage in actions that look a lot like murder. But perhaps I am being unfair, for warfare, though not encouraged in Scripture, is understood as sometimes necessary. So, perhaps this was warfare, and should be understood simply as war to be waged. If that is true, then it is necessary to make a distinction between warfare and murder.

Warfare in Scripture is only a feature of the history of Israel apart from being prophesied as something Jesus will do when He returns until He vanquishes His enemies. Warfare as a legitimate undertaking by Israel, or by Jesus when He returns, always has the following characteristics:

Now, with this Biblical understanding in mind, is it justified to take a car into a public thoroughfare used by all people and, leaning out of the window, randomly shoot someone because they are not Muslim? Let us apply those Biblical tests. Was the Jew (in this case) being violent? No. Was it done to restore peace? No. Was the Jew doing something utterly iniquitous? No, he was walking down the street, and only that. Was he doing violence upon an innocent powerless person? No. Did God say that that this man’s individual actions were so abhorrent that he had to be killed? Well, what actions were they, and whom did God talk to? Do we have reason to believe they would rightly hear God? No actions were known of, and no special quality justified the shooter to take it upon himself to interpret the will of the Almighty all by himself.

Perhaps God has decided that all Jews should be killed, just because they are Jewish?  If so, when did God say this, to whom, and why? Actually the Scriptures clearly indicate that God would bring the Jews back into their own land whom God had promised them (hence the term, the Promised Land), and He would bless them. If one studies even a little about Israel, it is clear that these things have come to pass.

Are the Jews perfect? No more than the rest of us. So, in conclusion, how was this drive-by shooting was a legitimate act of war? I cannot see that it could possibly have been, so then, it was murder.

Now, this one act is part of a much larger pattern, a pattern of the violence of jihad. If this act was murder, what about all the others? Are those murders also? By using the example of Scripture, one can start to shed light on when violence is justified morally, and when it isn’t.

Were the policemen who shot the person doing the murders acting rightly? Were they trying to stop someone attacking with violence? Yes. Were they defending the innocent, including themselves? Yes, they were. Couldn’t they just ask him to stop and come quietly? Actually, one of the dead was one of those policemen, indicating the man had no intention of coming quietly. So, their actions were reasonable and, in the circumstances, proportionate.

I have read that Allah mandates killing Jews and Christians and others, because they do not believe in the Allah of the Quran, but rather the God of the Bible. The Bible, on the other hand, NEVER mandates killing anyone on the basis of their faith.

On the Day of Judgment, God won’t dispatch people to hell because they believed the wrong things, it will be on the basis of what they did. Genuine faith in Jesus is the condition God seeks to grant people forgiveness for sins, so that their actions do not condemn them anymore. So, our actions condemn us, but faith in Christ is the means by which we accept our salvation.

I do hope this clarifies what is one of the most difficult topics, that of the use of violence. You can see I am not an absolute pacifist, as I do not see the Bible teaching such a position, because it leaves the oppressors free to oppress unhindered. On the other hand, it is clear from the example of Jesus that, just as He never injured anyone or threatened them, but did assert His authority to drive the money changers out of the Temple or two occasions, so we should avoid violence if it is at all possible without betraying those who depend on us for our protection. And if violence in a situation is necessary, it should be reasonable, proportionate and just. For God loves the oppressor as well as the oppressed.

God bless you all, and we pray for a more peaceful world,