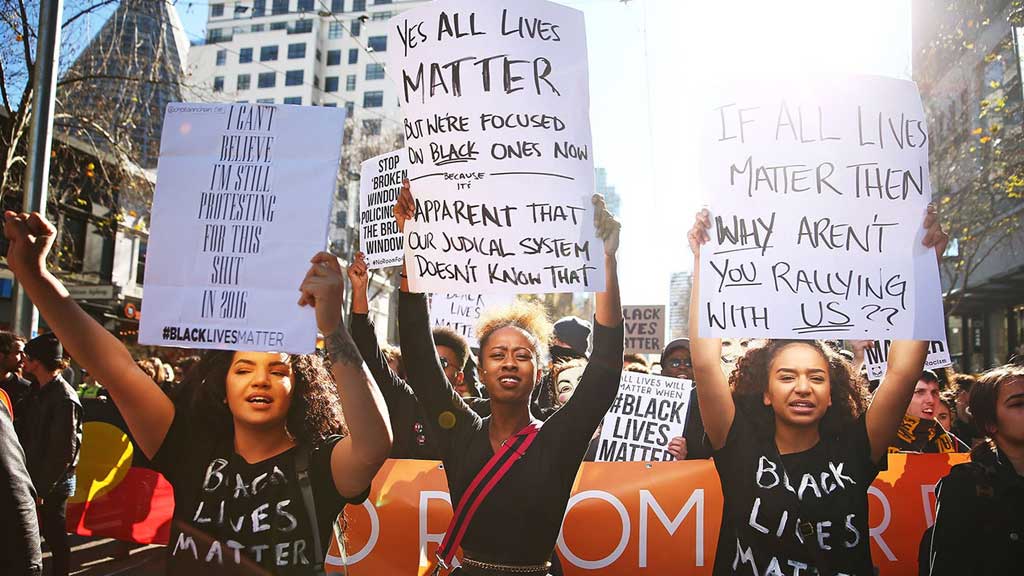 One of the glories of humanity is that we are all different.  We have different gifts and different strengths.  Different personalities – different likes and dislikes.  And there’s a positive rainbow of skin tones and bodily types.  Yet all alike are made in the image of God, and all are to be equally valued and respected.  Difference is to be respected, and the attempt to impose dominance – whether by Stalinist Russia, Nazi Germany, or Western ideological totalitarianism – is always wrong.  Sadly, this is exactly what we are seeing in the attempted exploitation of what is branded racial discrimination by extremists, whose goal is the destruction and dismantling of Western society and culture.

The recent shocking killing of George Floyd has rightly led to an explosion of anger over police brutality and discrimination against the black community in the US.   Interestingly, however, exactly the same thing happened in July last year to Tony Timpa, a white man in Dallas, who was similarly knelt on and choked by police officers till he died (https://www.dallasnews.com/news/investigations/2019/07/31/you-re-gonna-kill-me-dallas-police-body-cam-footage-reveals-the-final-minutes-of-tony-timpa-s-life/).   Mr Timpa’s family are also fighting for justice – but his death has largely passed unnoticed.  Certainly there have been no demonstrations or mass protest.  One wonders why.  Despite then what is being alleged by the current wave of protest, unprovoked police brutality in the US would appear to extend to all racial groups, and their policing methods as a whole need urgent review.

Be that as it may, the protests over George Floyd’s death have spread worldwide, and some of the protests have erupted into violence, coupled with demands for reparation.   Here in the UK we have seen statues defaced and torn down, and attacks on the police – met this weekend with counter demonstrations by groups anxious to defend the nation’s heritage.  Sadly, those demonstrations too saw violence on the part of some protestors, and there have been arrests on both sides.  Let us be absolutely clear.  All violence, whether initiated by white or black groups, is unacceptable, and all alike must be subject to legal penalty.

But it is worrying that amongst some of the more extreme supporters of the Black Lives Matter campaign we are hearing calls for the tearing down and dismantling of Western society, which, it is alleged, has both allowed and profited from racial abuse.   Again, let us be clear, the majority of ‘black’ people in this country do not think like this and are valued and contributing members of our society.  In every sense their home is here – many were born here – and their desire is not to tear down and destroy, but to be a part of the rich and varied culture that is Britain.   Sadly, however – and they may perhaps not want to hear this – many are being exploited by others of malign intent, who seek to stoke the narrative of injustice and oppression, as forerunner to the imposition of a totalitarianism to which all must bow the knee.

Several things need to be said.  First, the practice of slavery has been endemic to every society since cave men first gathered themselves into tribes and then began to attack each other.   Ancient Egypt, Israel, Greece, Rome, the Vikings, warring tribes in Africa … all alike enslaved the people they conquered, and it was only Christianity, with its revolutionary teaching that every individual was equally precious in the eyes of God and to be loved, that finally began to call that into question.

Perhaps astonishingly, though Britain was undoubtedly heavily involved in the transportation of slaves and their use in the new world, there has been no slavery in the UK since the 12th century, when it was outlawed by edict of the Council of London: “Let no one dare hereafter to engage in the infamous business, prevalent in England, of selling men like animals.”  So there are two points to be made.  First, that it is not only black people who have endured slavery – indeed in some Muslim countries today there are still large numbers of  both white and black slaves, victims of a belief that treats non-believers with contempt.    Second, that there have been no slaves within the British Isles for 900 years, so that all people of colour who are here – are here by choice.

Today in the UK, with the benefit of two hundred years abolition, we rightly say that the practice of slavery is evil.  But way back in the 19th century, the brave campaign led by William Wilberforce and others – to their clear financial detriment – must have been utterly extraordinary.  Slavery wasn’t just a fact of life for those on the wrong side of conflict – but it appeared at one time or other to have been accepted without question by all the world’s major religions.   And in parts of Islam, even now, as mentioned above, slavery is still both practised and approved, as evidenced by the estimated 46 million men, women and children enslaved today.

Yet, even given the weight of global approval, Britain, in the 19th century, led the way against this cruel system.  True, the process of liberation didn’t happen overnight, and we have to recognise that there are undeniably still inequalities that need to be addressed – but we have, in our imperfect way, been steadily ‘trying’ ever since, with the result that the UK today has one of the most inclusive and tolerant societies in the world.  If it were not so, why would so many have wanted to leave their countries of origin to come and find a better life here?

So the violence that has erupted in recent days, with members of the police being viciously attacked while bystanders looked on and laughed, and with monuments and statues defaced and torn down, should give us all pause to think.  That many in minority ethnic communities feel they are not totally accepted and are aggrieved is undeniable, but the attack on British institutions and our history is something different and is not acceptable.  The truth is, the situation provoked by George Floyd’s death is being exploited by those of malign intent, whose primary wish is to tear down and destroy our history, culture and society.

All lives matter, and there are clearly problems that need addressing.  The failure of education and community in many inner city areas, for example, that has fuelled gang culture and the terrifying rise of black-on-black violence, needs urgent action.   Which is not to say that all black families are similarly socially disadvantaged, but these problems do exist – and there are already many initiatives in place to try and support young people in these areas and give them hope and a future.  And in all of this – bombarded as we have seen this weekend by both sides – our police struggle valiantly to keep the peace on our streets.  They have their flaws, yes, but on the whole they are well-meaning, and they do not deserve to be the target of hatred and mindless violence.

No doubt some reading this will say mine is the voice of white privilege, which must be silenced and destroyed – and yes, over the last days VfJUK has received a number of emails saying exactly that, as well as accusations that we are racist bigots.   And all because in our mailing, The poison of bitterness, we dared point out that everyone – women, children, the disabled, and even men – in some way or another, at some time, suffer and are ‘victims’.   And that Christ – who Himself forgave those who crucified and betrayed Him – calls us to forgive, and then let go of our resentment and bitterness, and move on.   And if I may speak personally, as one of the first women to be ordained in the UK, then sent to serve in the city that spearheaded the national movement for opposition, I know exactly what it is to be discriminated against, mocked, marginalised and casually insulted … and even told that I was damned because I was a woman who had dared trespass into the God-given domain of men!  But so what?  Should I now hate these people, demanding their humiliation and removal?  By no means.  The Lord taught me a long time ago that I must forgive, and in that forgiveness that the offence must be let go – as He forgives us.  It is not easy, but this is the way of freedom and of love.  It is the way of the Cross.

It is entirely right that where there is wrong people should speak out and make their voices heard – and then as a society we need to address the wrongs and try and put things right, looking to the best interests of all.

Some who have emailed have said that their hurts are different and too big for this.  That they are second-class citizens and their pain can only be assuaged by destruction of the system that has inflicted such hurt.   NO. That the black community has suffered hurt over the generations is undeniable – but there is a time for all of us to let go and move on.   In the history of every race there is evil, and where it continues to exist it needs to be overcome.  But we are not bound by the sins of those who have gone before – and no one living in the UK today has personally committed or been subject to the wrongs being claimed.  Ours is the present and the future, to make of it what we will.

If this analysis seems far-fetched and harsh, then take a look at the website, Black Lives Matter (https://blacklivesmatter.com).  In the About Us section, the founders state that their mission is to eradicate white supremacy.  Elsewhere they say they want to free black people from oppression by disrupting the Western-prescribed nuclear family structure, which they’ll accomplish by fostering a queer‐affirming network, and freeing society from the tight grip of heteronormative thinking, dismantling cisgender privilege.  Now they have also started a campaign to ‘defund the police’, which would unquestionably expose all of us to harm (https://blacklivesmatter.com/defundthepolice/).

Animal Farm writ large, with the deliberate promotion of anarchy to pave the way for cultural overthrow and dominance.

In the UK we have our faults, but we are by and large a quiet, tolerant people, happy to accept all. Most of us try very hard not to discriminate against others, and indeed in many areas of education and public life today we see ‘positive’ discrimination, deliberately aimed at giving BAME people ‘a chance’.  So let there be an end to the stoking of hatred and division, and let us instead talk to each other quietly, letting all be heard.  That all may flourish and prosper, and that we may go forward in unity – one people.